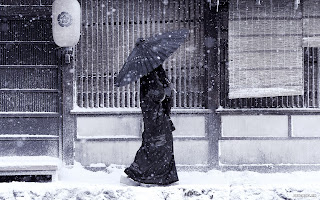 It's cold. Not as cold as the east coast of the US granted, but colder than the very surprised Hong Kong which is experiencing its lowest temperatures since the 1950s. Tokyo was -2C this morning and the population is well wrapped up in their winter warmers however this temperature is better than the -16C of Karuizawa, some two hours drive away in the mountains. Strangely
there, at around 3,000ft, the air is so dry you can still walk outside in a t-shirt and drink a coffee; people even hang their washing out to dry in the freezing temperatures. 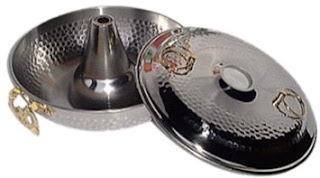 So it's time to put the sushi away and bring out the boiling pot. Japan's secret weapon when the temperature drops are the boiling waters of the shabu shabu cooked by hand in a nabe (pronounced nah-bay, the general phrase for a "pot") in the middle of the table. Thin slices of beef are gently wafted back and forth for a few seconds until cooked through and then dipped in a soy or sesame source and eaten whilst still steaming; warms you through on a cold winter's day. The name, by the way, derives from the wafting motion, one shabu for each wave of the meat.

The pot will be filled with vegetable too and a useful flat ladle provided to skim off the surface as it becomes coated from the contents. And finally a plate of thick kishime noodle will poured in and cooked in the now flavoured soup-like liquid. On the whole, a great way to fill up and warm up. But don't forget those little bowls of source, known as ponsu, it can be painful putting boiling food straight into you mouth. As a friend of mine demonstrated to me once.