Attention to detail - a national obsession

So last week the taxi that came to collect me in the rain decided to park in my driveway. Unfortunately my car was still in it and the inevitable crunch has landed it in the hospital for two weeks of repairs. However, this being Japan, they have provided me with a replacement to drive whilst waiting for mine to return. And it's none too shabby it has to be said. Not everyday you're lent a $100,000 car to play with. 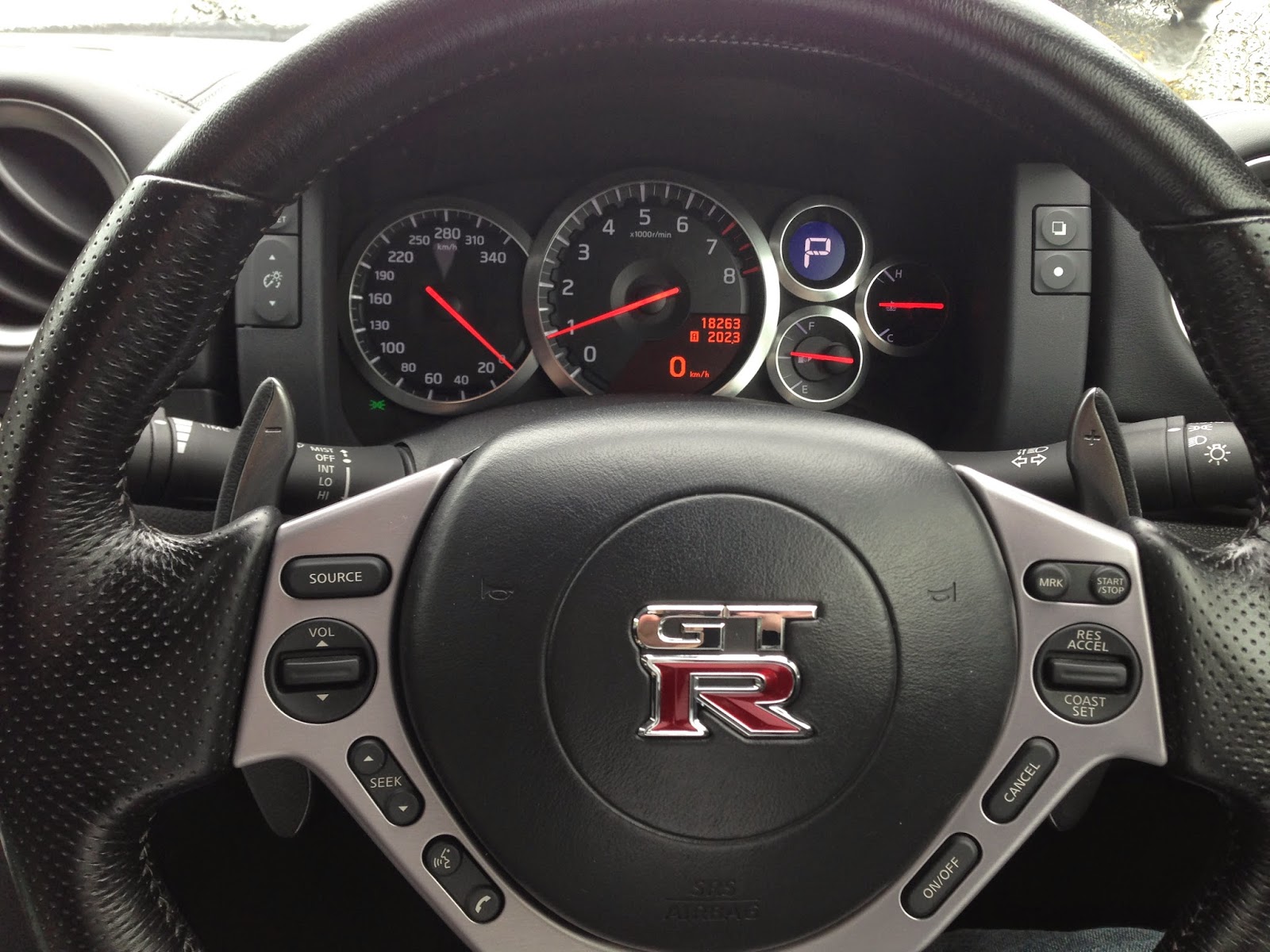 The interesting, and very Japan element of the experience though was the pre-flight test. The gentleman delivering the vehicle required I examined it and note any existing damage before I took the keys. I walked around it and confirmed it was in perfect condition, not a scratch to be seen. He looked at me somewhat shocked and took out his notes which clearly identified eight separate scratches that I'm sure you'd need to be a CSI to have discovered.

Japan has a passion for precision and detail. Every scratch, every dent, every tiny nick is discovered, noted and logged. And that even included underneath the front spoiler.
Posted by TenguLife at 4:18 PM No comments:

The Tanuki of Tokyo

Tanuki are a wonderfully cute looking little animal native to Japan. Sometimes confused with badgers and racoons they're actually a completely separate species known as the racoon dog. However "racoon dog" is nowhere near as romantic sounding as "tanuki" which has been incorporated deep into Japanese mythology. Legend has it that they are mischievous but friendly characters with the ability to change into many shapes to help the weary traveller including a hat to protect from the sun or even a tea pot to provide refreshment.

They can often be seen at dusk stalking the sides of roads in the countryside and statues of them are everywhere across the country outside shops and restaurants to bring the patrons good luck. But I've never seen one in the city before. 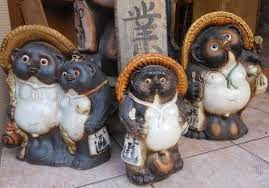 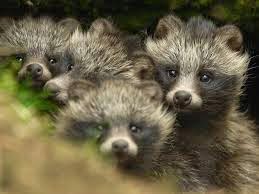 Today around dawn I was awoken by a single bark from my dog. He's not very big so as a guard dog he wouldn't really make the cut but as an alarm dog he's outstanding. And if he barks in the night I know there is something wrong. So I got up and looked out of a second floor window, straight into the eyes of a pair of staring tanuki, balancing on a power cable outside my house.

They looked at me for a few seconds then looked away and carried on on their journey, along the cable to the main power lines and down the street balancing perfectly all the way. It was a rare sight and I'm glad I got up but the one thing that stood out for me was how clearly they were together as a pair. It was strange, and maybe part of their mythology, but I really felt that if they could have walked along those cables side by side, holding hands they would have. 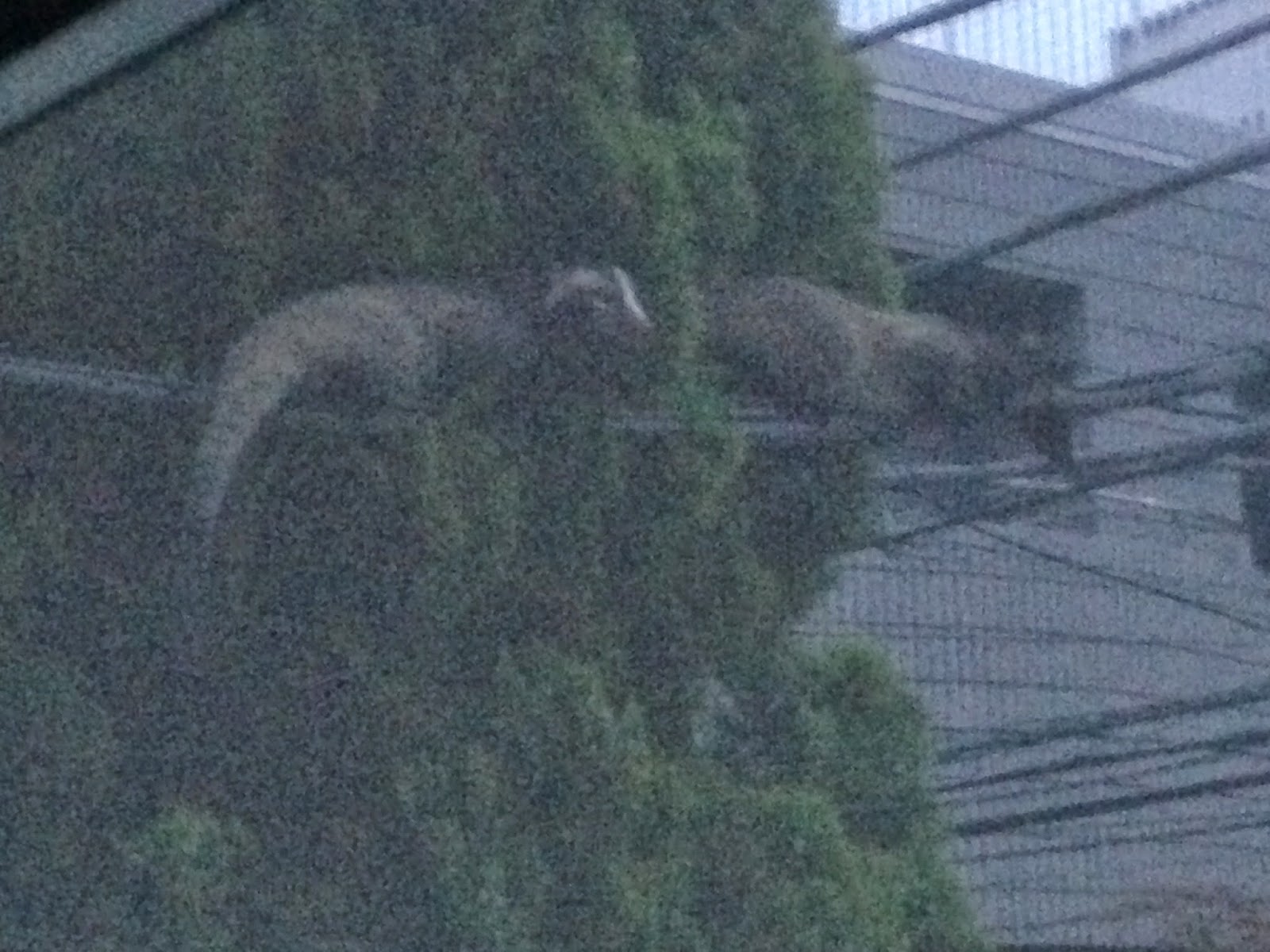 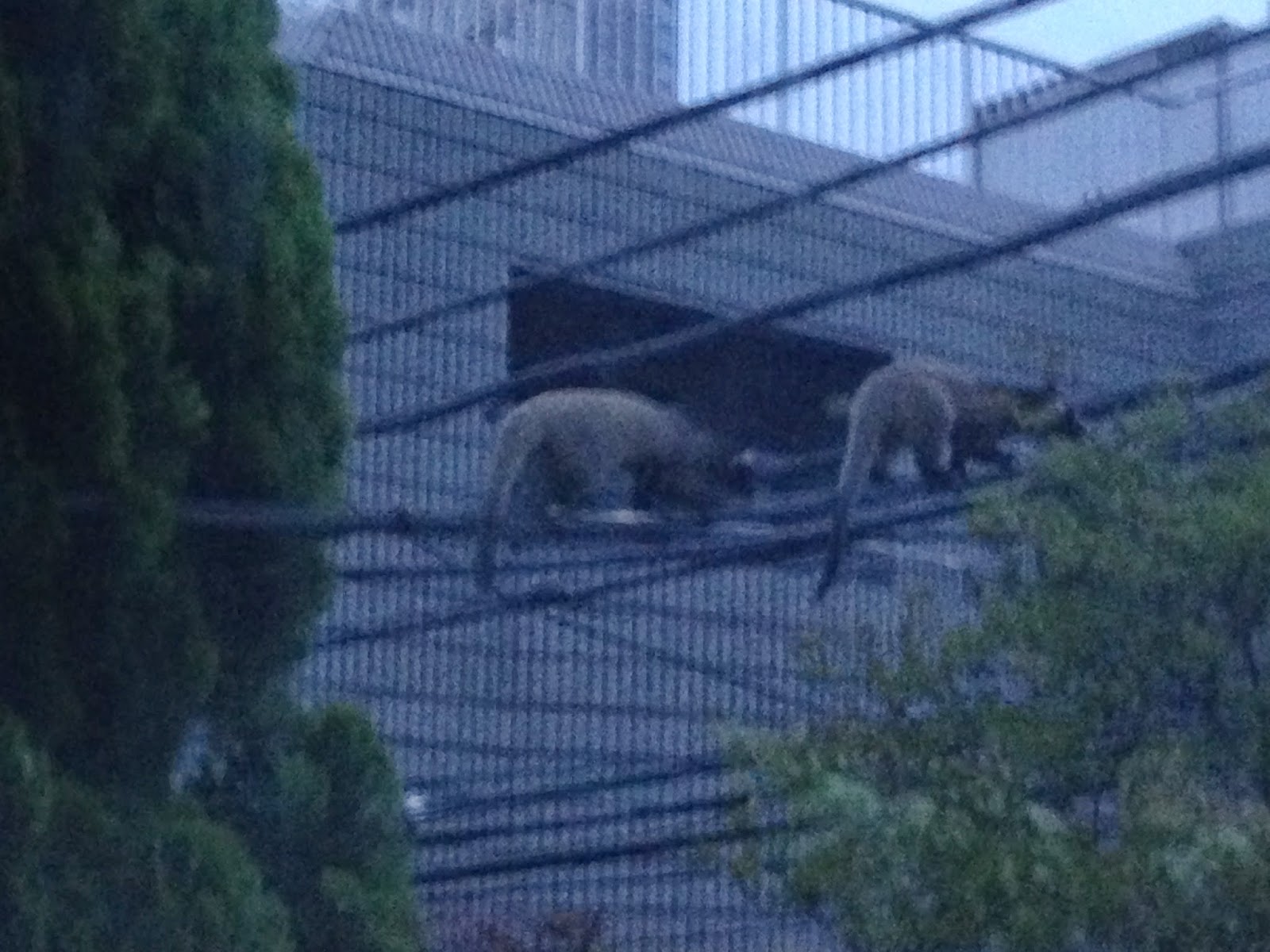 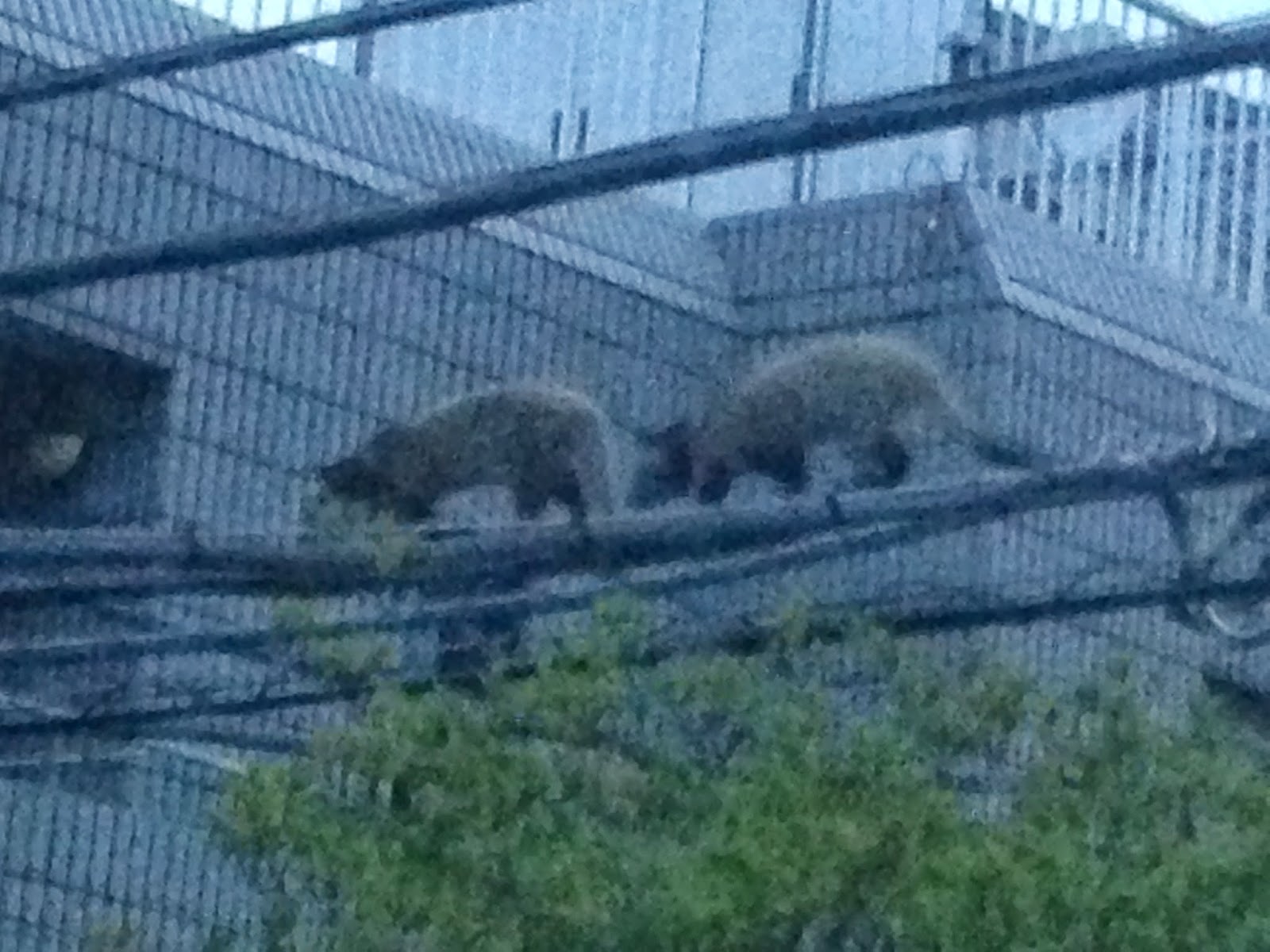 [Update] Since first writing this article a friend has contacted me and our friends here may not be tanuki after all but possibly palm civets. And those are vicious little critters.
Posted by TenguLife at 10:30 AM 2 comments:

A Flash Mob Wedding in Japan

Last night my friend got married. I've blogged him before, Kaneko-sensei, a champion kick-boxer in Japan. And yesterday, at the ripe old age of 42 he married the lady of his dreams Chihiro. She is an incredible Flamenco dancer and together they demonstrated you're never too old to take up a new hobby as they danced into the night.

And then their friends flash mobbed the bride! 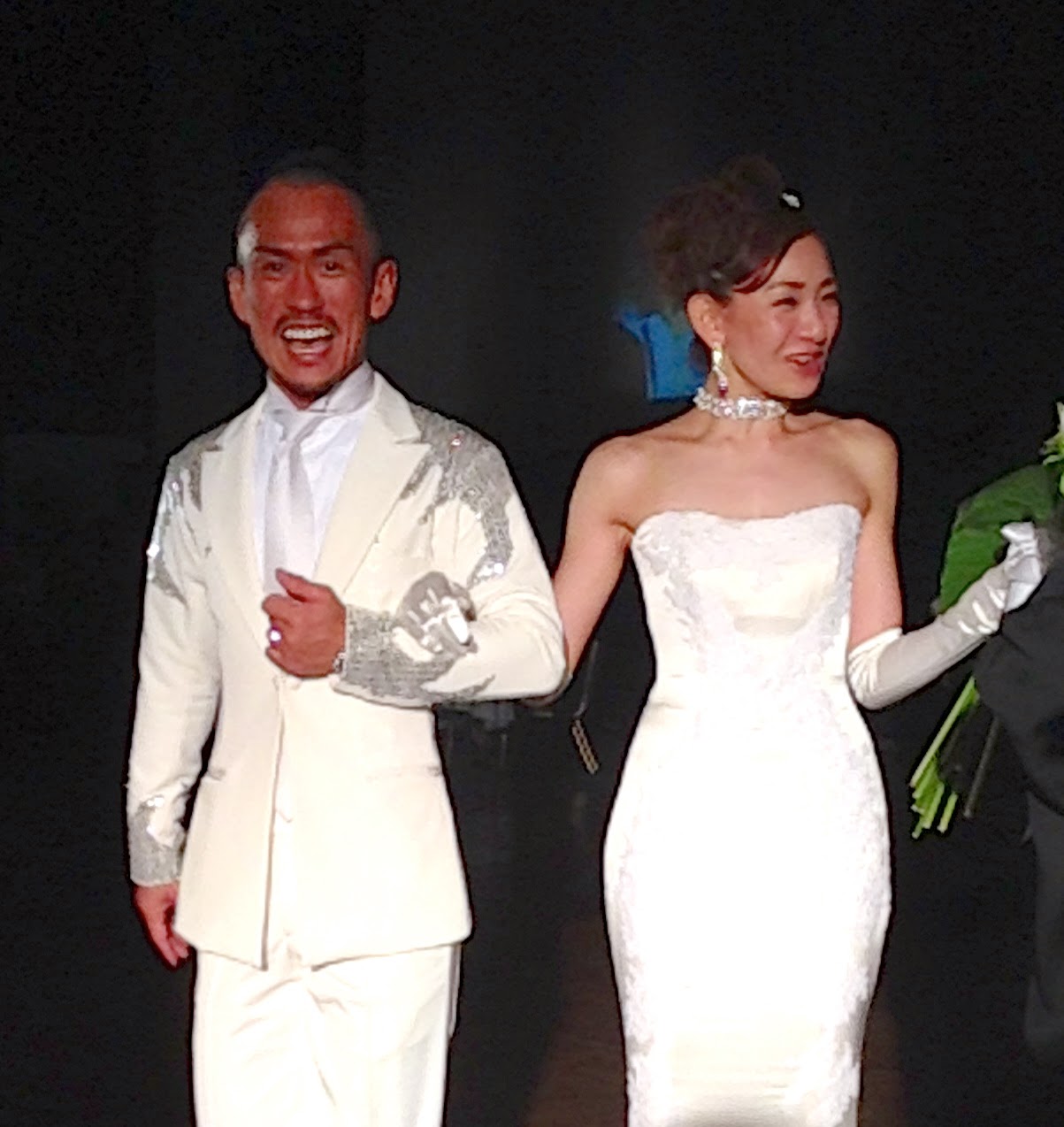 Posted by TenguLife at 10:12 AM No comments:

Walking the Yamanote Line - in pain

The Yamanote Line (pronounced yama-no-tay) is the loop train line that encircles central Tokyo. When I say central Tokyo that includes areas of the city I've never even seen but then Tokyo is a big place. There are twenty nine stops (soon to be thirty) linking the main hubs of Shibuya, Shinjuku, Ueno, Tokyo Station etc and many smaller ones such as Tabata and Tamachi that many have never heard of. And for the train it is a  34.5km journey.

So yesterday was Yamathon Day, an annual urban challenge to walk or run the entire circuit in teams of three or four, taking selfies at each station. I wasn't thinking of participating but was interested in what there was to see. I'd ridden the course before but that was twenty years ago and remember little of it. That was also in the days before GPS and so I had no idea I was setting off on a 50km journey. The trains travel in straight lines; pedestrians cross bridges, go down blind roads, hit construction or diversions and occasionally get lost.

I started at 5.00am from Shibuya, almost the opposite side of the circuit from the official start in Yurakucho at 7.00am, wondering when I would meet the first competitors coming the other way. Sure enough, at Sugamo on the northern stint a team of four came running towards me looking good. These guys were on track for a fast time and it was well possible I would see them again as I walked the back straight towards Shinagawa as they closed on the finish line.

Well, to cut a long story short, after 30km in just over six hours I reached the official starting point with very blistered feet and age showing me up badly. Then courage being the better part of valour I courageously decided to call it a day.  I'm committed to trying again, next time with lighter gear and better footwear. May be next year I'll even try the Yamathon itself. But to everyone who entered the challenge I think you're all awesome. For those who ran it, unbelievable. And to those over forty five and overweight who made the distance, you're Rock Stars! Hope to be one too next time.

My new book, "The Expat's Guide to Japan" is nearly ready to roll. The final touches have been made to the edit and the only thing left is the cover shot. Being an expat's guide, the idea was to show an expat with a beautiful Japanese girl in kimono. The brief to Eddie, the expat, was to think "look out Japan I've arrived" and the brief to Rumi, the kimono girl was to think "this is going to end in tears".

The pictures were taken by the wonderful Imano-san from And Photo in Daikanyama. At the end of the planned session she saw an opportunity, grabbed her camera and started working around the pair of them taking some incredible, totally unscripted shots.

And now I have a new problem. There are so many great shots I can't decide what to use for the cover of my new book. But I do know Japan has some very creative, young, female photographers. And I also owe a big thank you to Eddie and Rumi for being awesome and Christophe and Asuka for lending me the sword which is real. And very sharp. 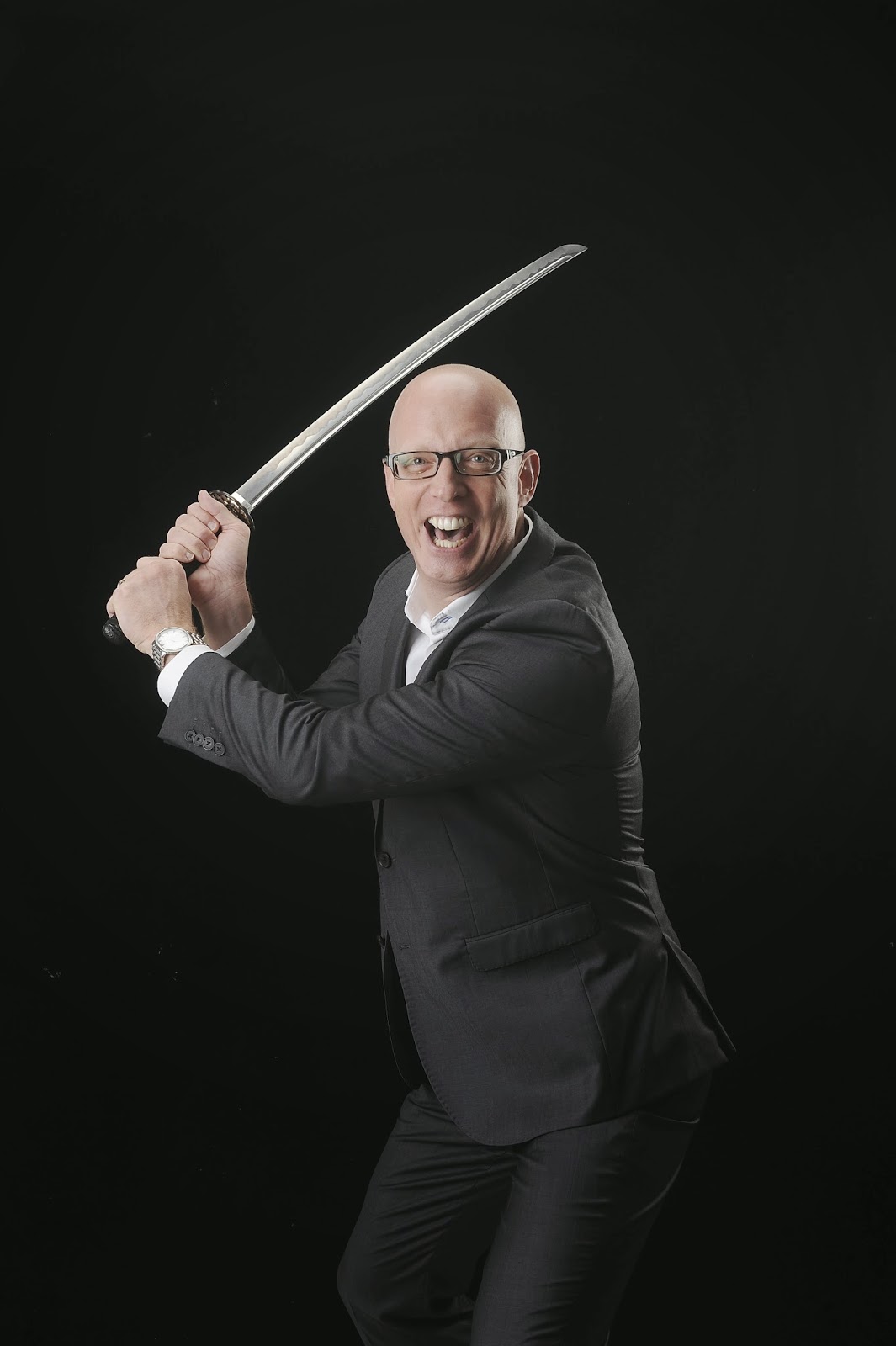 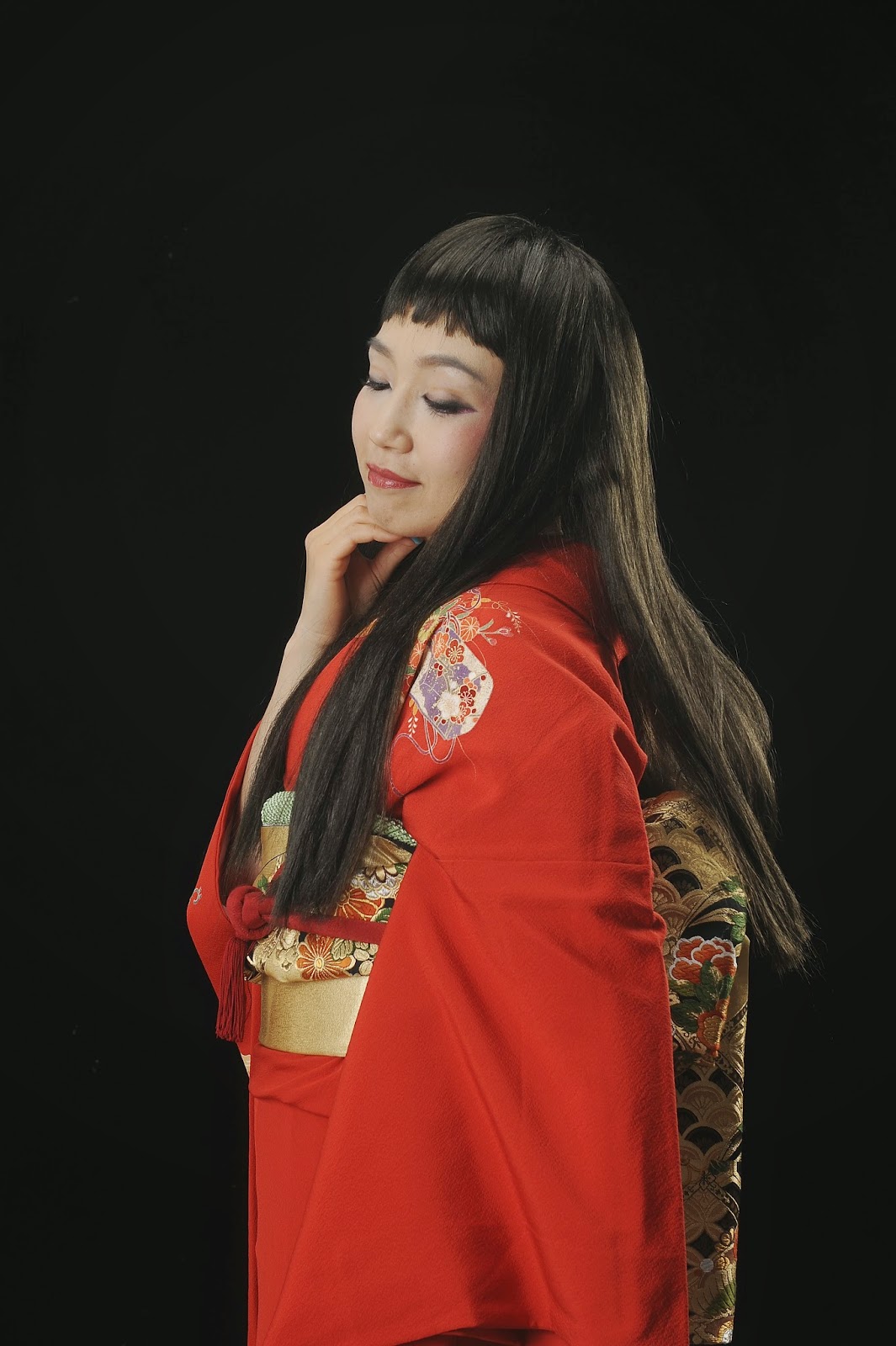 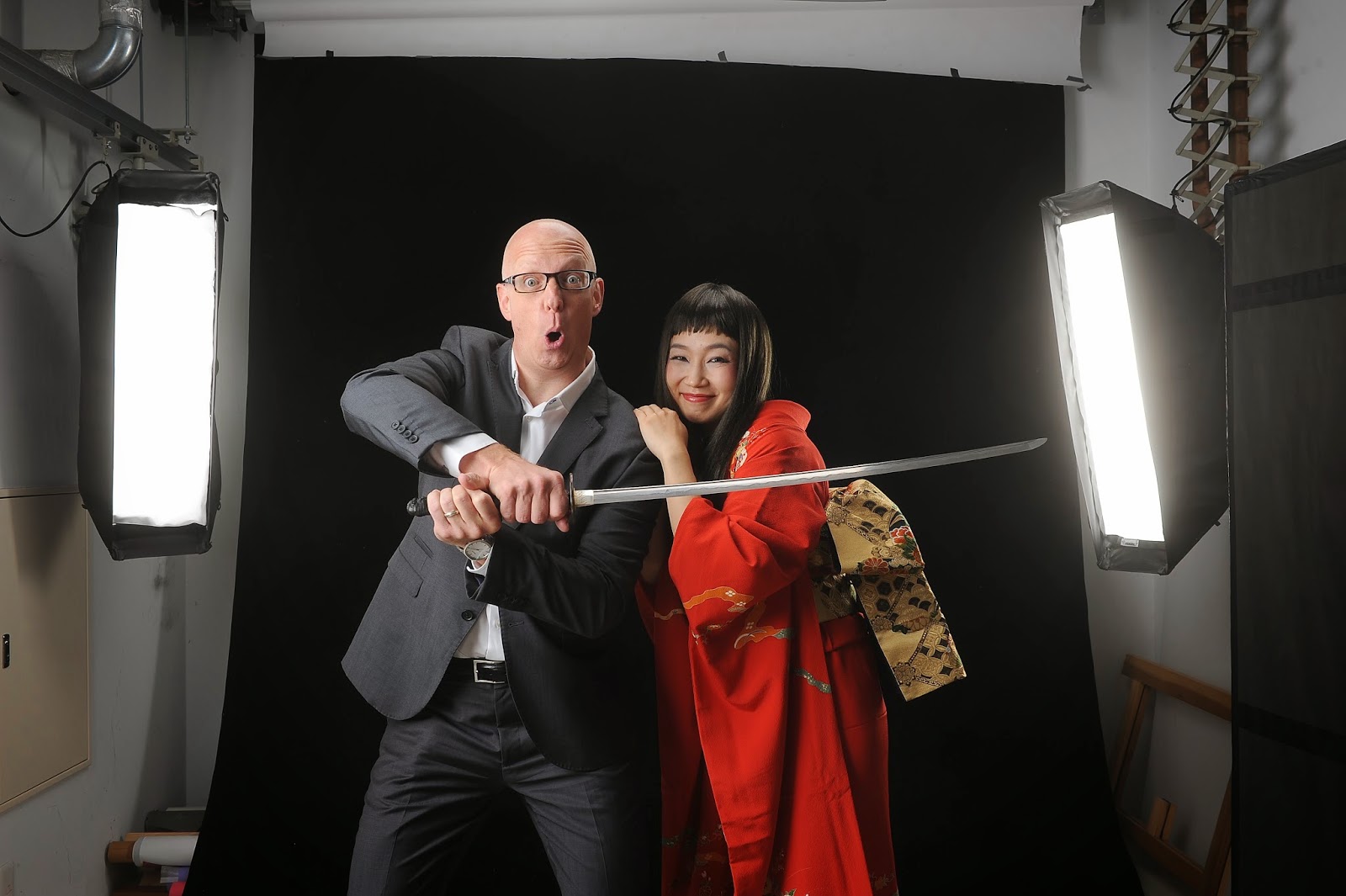 Posted by TenguLife at 10:37 AM No comments: 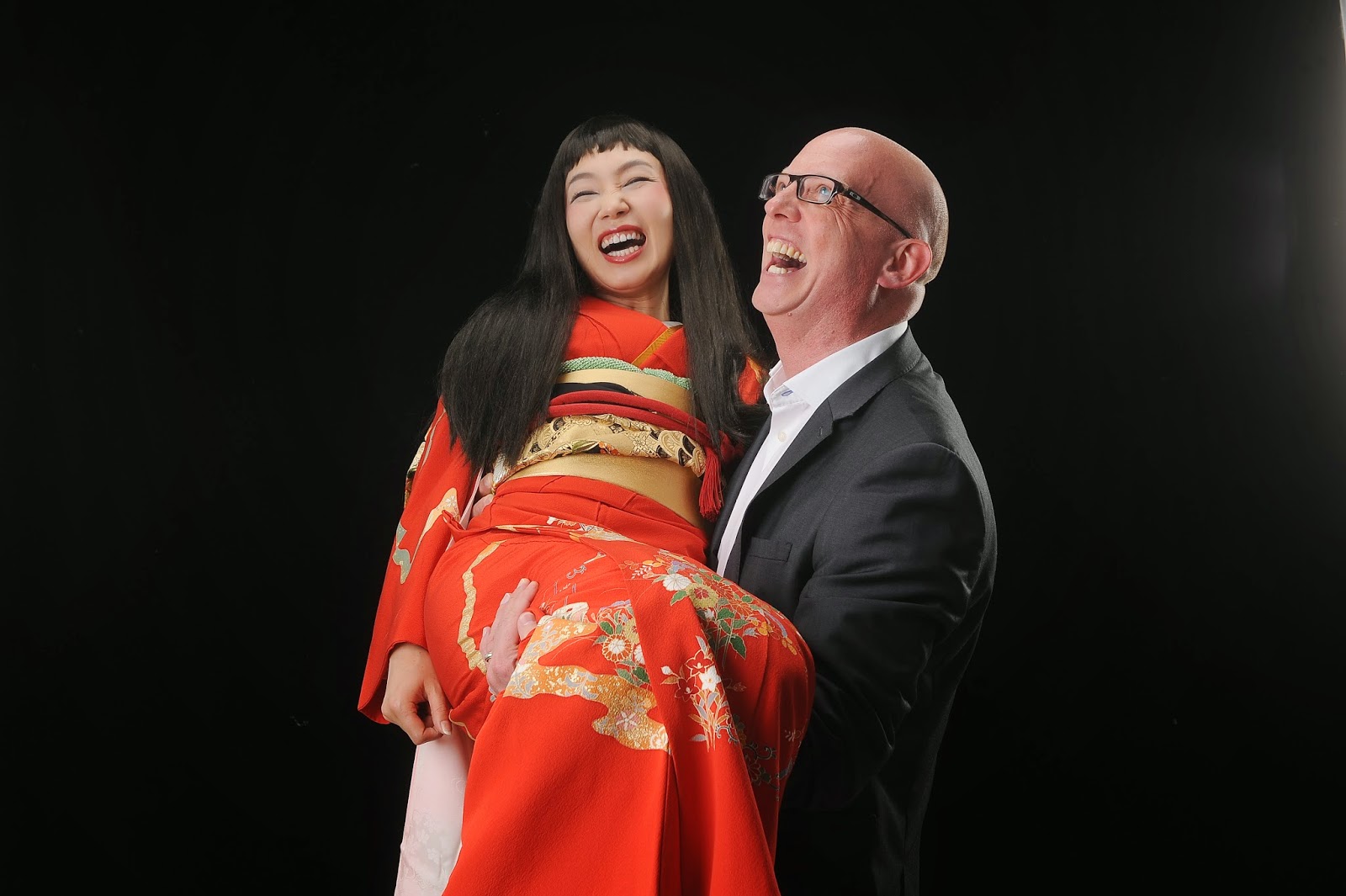 Posted by TenguLife at 10:21 PM No comments:

The Japanese National Stadium, the Kokuritsu Kasumigaoka Rikujo Kyogijo, doesn't really have the iconic ring of "Wembley", "Stade de France" or "The Rose Bowl". And it's finally been decided that it's time to go. Opened in 1958 it hosted the Asian Games that year followed by the Olympics in 1964. And after that it's been a little quiet. In 2002 when the World Cup was held in Japan, not a single game was held in the capital city. The stadium being deemed simply not up to the job.

So a week ago it held its last game; a Japan vs Hong Kong Rugby match. Japan took the game 49 - 8 and thirty thousand people appeared to have turned up as empty seats. Last week though was the closing ceremony. A permanent finale pending demolition next year followed by the construction of the awesome new Zaha Hadid designed creation in time for the Rugby World Cup in 2019 and Olympics in 2020.

The highlight of the ceremony was an honour salute from six jets from the Japanese Air Force. The sight was impressive and the flight path took the planes directly over Shibuya where I live. It wasn't that well publicised though so many missed a rare sight of fighter jets over Tokyo. It's been a while as it were. And many others thought China had arrived. 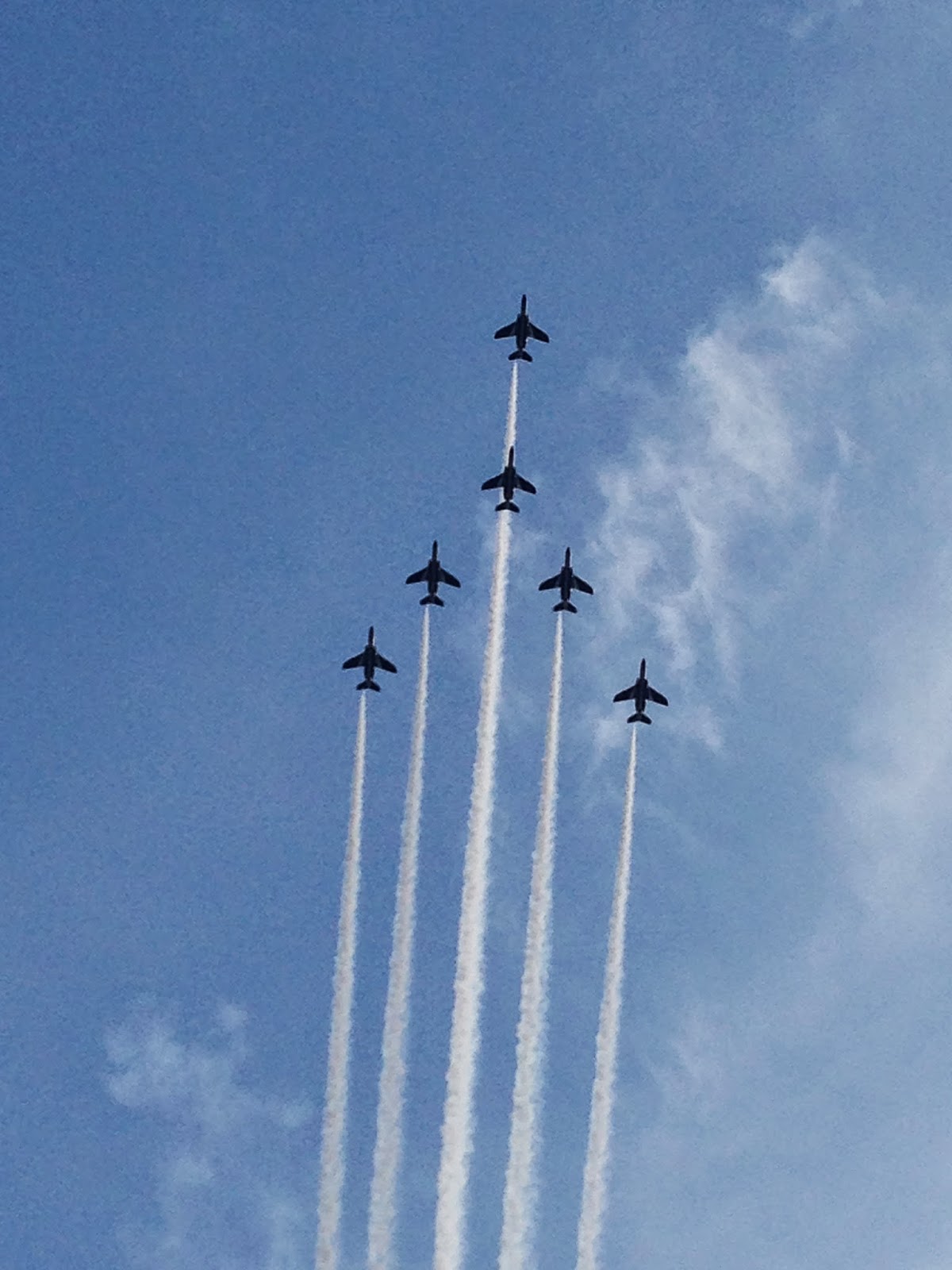 Posted by TenguLife at 11:23 AM No comments: