The interesting architecture of Japan 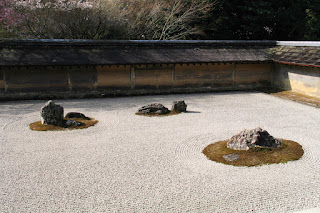 There is a Zen garden in Kyoto composed of nothing but a sea of pebbles and fifteen rocks, which are placed in such a way that only fourteen can be seen at any one time. And this begs the question whether there are actually only fourteen rocks and to enhance the experience, the story as grown with history of the additional elusive individual. But Japanese architecture is not all Zen and temples, fine as many of these examples may be. 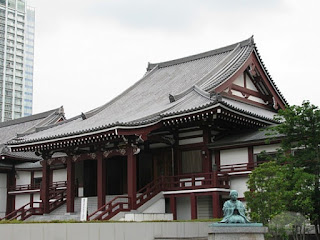 Residential housing is typically constructed with the intention of a mere thirty year life span before being razed and replaced. Even many of the temples themselves are often demolished and rebuilt on a regular rotating basis, few remaining long enough to become the equivalent of a national treasure. Given the country's paucity to typhoons, fires and earthquakes, this could be considered somewhat unsurprising; why build for the millennium when mother nature will reclaim the work in a few short years?

Some of the more modern architecture can be of quite some interest though. The new Hikarie Building in Shibuya is an example of the work of someone schooled in 1960's London and what the discussion was at Asahi Beer, when they reviewed Philippe Stark's plans for their new "poop" building, is anyone's guess. But my favourite is the Aoyama Technical College. Constructed to resemble what is clearly a Transformers fetish and located in the backstreets of Shibuya half way to Daikanyama, it always leaves you wondering, just what is in the bubble on the top? Still, I guess I prefer a world of imagination to one of concrete high rise blocks. Like London. In the 1960's.

Posted by TenguLife at 3:19 PM