Dr Gabriel Symonds is a long term member and stalwart of the foreign community in Japan. He's also a friend of mine. He looked after me when I was sick and he told my son he would get better when he was too. Now, in well earned retirement, he remains Tokyo based and focuses on helping people kick that nicotine monkey off their backs. And he dropped me a note asking if it would be ok to post a story of our adopted country to TenguLife. And of course it is. Oh, and he also, over lunch one day, inspired a story of street art that will make you smile. 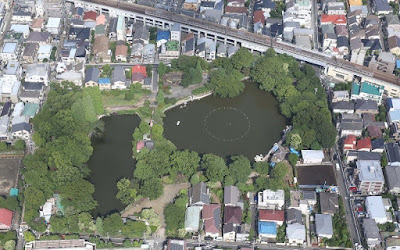 A ten-minute walk from where I live in Tokyo there is an open space called Himonya Park. It has many amenities, fine trees including several cherry blossom trees, a boating lake with a fountain and ducks, a petting zoo (not so nice for the animals but that’s the way it is in Japan), a shrine which can be reached by a small bridge abutting the lake, a children’s playground, etc.

Alas, there’s always the shadow side. In June 2016 a horrible crime was committed nearby. An eighty-eight-year-old woman was murdered and her dismembered body dumped in the lake. Naturally, in a case like this the police must be thorough in their investigations. And thorough they were. Frogmen searched the lake; then they drained it and searched some more. DNA analysis was carried out and before long a suspect was apprehended. It was thought the murder occurred in the victim’s home, 600m away. Nonetheless, Himonya Park was cordoned off for months.

When it was re-opened I went for a walk there on a sunny autumn afternoon. But the park was not as it used to be. Many trees had been cut down and others severely trimmed. I counted the remains of about fifty large and small trees which showed signs of having been recently felled – sawdust was still visible around the stumps.

Of course, any park or private garden needs to be maintained. Nature cannot just be left to run wild or the place will soon be become unusable. But this was not normal maintenance – lopping off dead branches and coppicing to ensure healthy growth. This was wholesale destruction of healthy trees – vandalism is a better word.

Why, oh why, did they do it? The local council of the district where the park is situated (Meguro-ku as it’s known) maintains an inquiry desk. I called and spoke to a helpful woman: why were so many trees cut down in Himonya Park? She promised to find out and call me back. She did so. The reason for cutting the trees was, as I had suspected, connected with the murder.

Apparently there had been a debate among local residents about what, if anything, should be done with the park to try to prevent a similar outrage in the future. More CCTV cameras were installed, and I can find no problem with that. However, some people wanted in addition to thin out the trees so there would be less cover for someone intending to commit a crime; others opposed this. Predictably, the tree cutters won out.

I suppose it’s human nature. A crime is committed or an accident occurs and a need is felt to blame someone or something. In this case, even though the suspect had been caught, evidently it wasn’t enough.

This is shown by the story of a friend of mine some years ago in Tokyo who was in his brand new Jaguar motor car, waiting at traffic lights. A boy on a bicycle coming down a path adjoining the road couldn’t stop in time and collided with my friend’s car causing expensive damage and the boy sustained minor injuries. The police, however, blamed my friend, saying with impeccable Japanese logic, that the accident wouldn’t have happened if he hadn’t been there! (They didn’t take this one stage further: if the boy hadn’t been stopped by colliding with the stationary car he might have carried on into the road and could have received much more serious injuries.)

In the case of the murder it was not as if it had occurred in the park; nor that this park was notorious as a place where child-molesters lurk in the undergrowth waiting to pounce; nor that the lake is the location of choice for murderers to dispose of the dismembered remains of their victims. What happened is tragic and shocking, but as far as I am aware it has happened only once. And the chances of something similar happening in the future in this place I should say are almost zero.

The friendly Japanese woman whom I spoke to noted my concern about felling the trees, and then made this telling comment: ‘It’s not very logical.’ 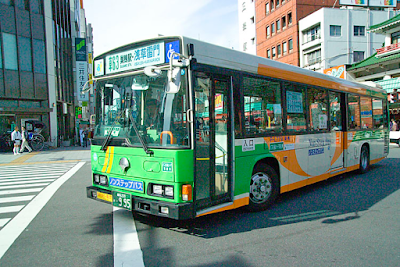 It’s interesting traveling on buses in Tokyo. You can tell the drivers are very well trained and safety is paramount. When a bus turns a corner there is usually a pedestrian crossing, as in the illustration. The bus will come to a complete stop and the driver will deliberately look and point to the left and right and check the front mirror to ensure the road is clear before proceeding. He may audibly say ‘Left, right, front – OK’. This is called ‘pointing and calling’. You can also observe this if you are in the front carriage of a local train, behind the driver. It’s quite a performance. The driver is alone in the compartment and appears to be talking to himself.  He points with his white-gloved hand at the timetable, speedometer and any wayside signs and calls these out aloud. The idea is to focus attention for safety, in which Japan has an excellent record.

Though I usually travel by car on Tokyo’s congested roads – an experience in itself – sometimes I take the bus. Having reached retirement age, if the bus if full, often a young person will offer me their seat. At first I was shocked that I must appear so old! Now I just say ‘Thank you’ and take the seat – unless a very old person gets on after me in which case I offer my seat to him or her.