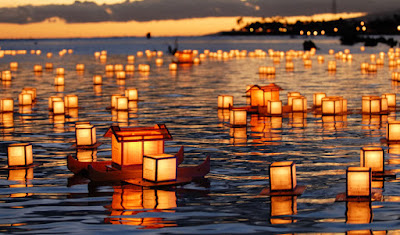 O-bon will be with us soon. Although not an actual National Holiday, the entire country will close down and the city dwellers will return to their ancestral homes to be with extended families. During the middle of August each year, Tokyo becomes a veritable ghost town, devoid of cars, noise and inhabitants. Almost everyone will be on a train at 200% capacity or queuing patiently at an airport waiting for their flight. And those who chose the car will be in a 100km tailback. 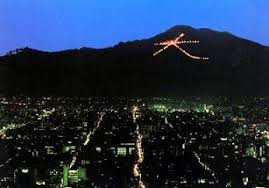 If you do chose to spend the time in the hinterlands, you are in for something special though. Across many of the ancient lakes, families will float burning candles to say farewell to those lost in the past year or simply to remember those who came before them. There will be festivals in the streets of usually sedentary towns as well as in the woods and forests that cover most of Japan's mountainous centre. Kyoto will celebrate with the giant, burning symbols of the Daimonji, the guiding gates to heaven for the souls of their ancestors. 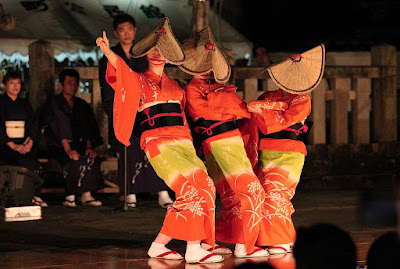 And if you are looking for something even more special though, the Owara Kaze-no-Bon is an experience to behold. Nearly two weeks after O-bon, faceless dancers spend three nights protecting their crop from the force of mother nature. Seen as the highest risk time of year in the rice farmers calendar, with the typhoon season at its peak, the hypnotic figures ward off evil spirits, repeating a ritualistic, almost hypnotic, dance over and over again, hats pulled close to hide their faces. And, after the three nights are complete, the town returns to normal. Until it's time to protect their land and lives again next year.