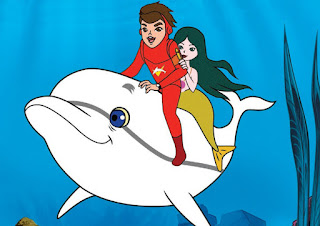 If you remember Marine Boy, you're probably fast approaching the big 5-0. Or past it. The oxy-gum chewing, sub-aqua hero, along with his dolphin friend, Splasher, would save the oceans, and mankind along with it. An early example of colour television, it first broadcast from 1969 to 1971. And as a young child I would be transfixed every time I heard that opening theme tune. Made in Japan, it came as a spin-off from an earlier series though names and looks were slightly modified and for contractual reasons it was actually shown in the US before being broadcast in its home country.

A few years before Marine Boy ran the live action show Flipper. Actually starring five female 'stunt' dolphins, and one male for the famous tail-walk, it ran from 1964 to 1967, so I guess I saw the repeats in the years to come. Flipper, along with his friend and marine park ranger, the widowed Porter Ricks, would have great adventures and the baddy always lost. However, the Flipper dolphins were caught and trained for the TV show by a man named Ric O'Barry until one day one of them died in front of him for no reason. It just gave up living, not wanting to be a captive anymore was his belief. 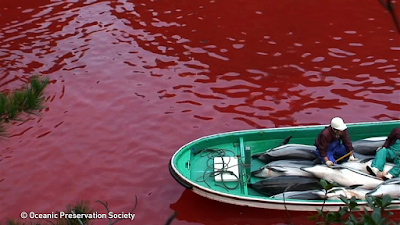 And now we come full circle. Splasher was loved by the children of Japan but O'Barry brought a tragedy to the world in his heartbreaking documentary The Cove in 2009, as Japan sat by and let the  small town of Taiji slaughter thousands of dolphins for not much more than dog meat. The hunt begins in the early days of September and the argument goes that it is allowed under international law. Well, the law can be an ass. In life, just because we can do something, it doesn't mean we should. We used to burn witches at the stake and crucify heretics but that hasn't happened for a while. Times really can change if we want them to. Change.

Posted by TenguLife at 5:36 PM