TenguLife is on vacation. Which is good because it is wet and cold in Tokyo. In August. And I'm going to England. Where it's usually wet and cold at any time of year. I really should plan my vacations better. See you soon...

The "Mother of the Seas" - A Seaweed Story 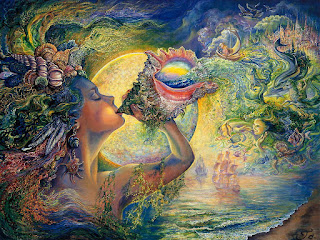 It has to be said, I enjoy good sushi with my two favorite delicacies being uni (the inside of the spiny sea-urchin, akin to eating slightly thickened seawater) and ikura (the slightly less salty and more familiar, salmon roe) both of which arrive at the table encircled in nori, the dark green crispy seaweed which is actually conjured from a red, cool water algae (it isn't actually green at all). And without this porphyra seaweed, my two favorite dishes would be simple pile of mush on a plate. 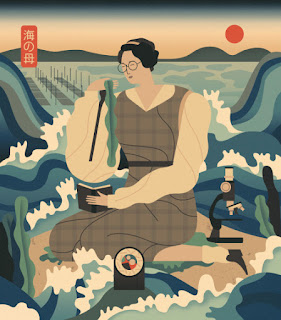 And in 1948 that was very nearly the case. Harvested from the eight century, porphyra began to be actively farmed from the seventeenth when farmers would place poles into the water for it to wrap and grow around. The use of nets was later introduced proving a success and significantly increasing output but nets were capital intensive though in good years proving a sound investment. In poor years though it could prove something of a gamble and then in 1948 a series of typhoons, peaking in September of that year, all but wiped out the sea crop.

And at this point in wades the Mother of the Sea to the rescue, literally. In the 1920's an English phycologist (yes, I misread that as psychologist too at first), by the name of Kathleen Mary Drew-Baker figured out the reproductive cycle of the algae, something that had been a mystery until that time. Her breakthrough provided the groundwork for the resurrection of the nori industry in Japan and in recognition of her contribution to saving their industry the people of Uto in southern Kyushu erected a monument to her, named her "Mother of the Seas" and dedicated 14 April in her honor. And rescued my favorite mush. 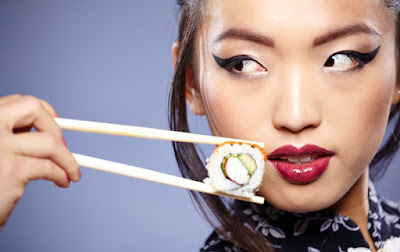 A dogs life, in English, in Japan 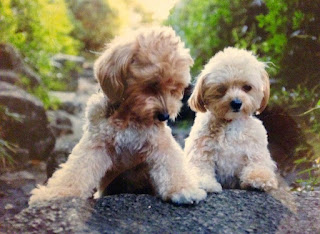 So we have two dogs. They're unrelated but are both the same cross. Chihuahua / poodle. And they're cool. They joined us on Valentine's Day 2011, which, for anyone who cross references, is about three weeks before the earthquake. The big one. Five days after the quake, tsunami, nuclear meltdown, etc etc, I got my family on a flight to foreign lands but stayed myself with our new little friends / responsibilities. And I was so grateful that they were with me as the gasoline ran out and lights began to fail. Those weren't great days but all in the past. 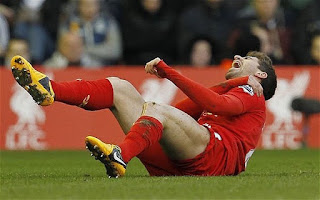 And then you know how it happens. Everything goes wrong at the same time. It's a national holiday. My wife is out of contact. And one of our dogs dislocates her hip. We don't know how but I found her at the bottom of the stairs not being able to stand and gently whimpering. [(earthquake while I type) (tiny and I caught the tv) (no worries)]. Having been a rugby player and seeing a shoulder dislocation I can guess the pain she's in. And, of course, her regular vet is closed for  National Mountain Day and with any vet, without my wife, the Japanese is going to be tricky. "Dislocated hip" isn't exactly in my vernacular.

And then the best thing that could actually happen, happens. My wife's phone comes back on line. She's found another vet nearby and he speaks English (as does his wonderful assistant). And on a national holiday he will open up early for me. And, after sedation and two general anaesthesia, our six inch tall little chawoodle is now on the mend. I rarely evangelize here on my blog but this time, it's a huge thank you to the team at West Cross in Nakameguro, downtown Tokyo. Life in a foreign land and language is tricky sometimes. But it's not impossible. And it's important to say thank you.

Where to stand when the lights go out

It's summer. And to many that means something involving Mount Fuji, the sacred symbol of Japan the world over. Looking exactly the way a child would draw a volcano, these days it attracts some 300,000 each year to its slopes with its currently popularity being attributed by the government to a World Heritage listing in 2013. Presumably the thinking goes that people hadn't noticed it until then. And so if you are going to climb to the top of a 3776m stratovolcano, you might want to remember that the vertical lift from the fifth station is greater than sea level to the peak of Ben Nevis, the highest location in the UK. And that the support facilities are closed on weekdays.

But if your plan is to see, rather than scale, this national icon, don't actually go there. If you do you'll see a car park and a path. There is not much to view when you're standing on it as it were. The photography from Yamanakako to the north or Hakone to the south can be stunning and the west coast of the Izu Peninsula offers a beautiful, though rarely seen, vista (and don't even try if you get car sick). But you also need to be lucky, there's a lot of cloud available when you're the highest obstacle between the winds of continental Asia and the warm waters of The Pacific. And then of course, the question is where to stand when the fireworks go off for real.

Technically still active, Fuji-san last erupted in 1708 though a M6.2 quake in the locale that went off late on a Tuesday evening following the mega-quake of March 2011 did make us all somewhat wonder if we were in for a more contemporary visit. And if it does go off, the conventional view points mentioned above would be a little too close for comfort. However, the bar on the fortieth floor of the Cerulean Hotel in Shibuya, downtown Tokyo, might just be ideal with a 100km direct line of sight. And then you might want to leave. That ash cloud will fuse the power grid and collapse the city as it slowly crawls towards you.