UPDATE: looks like the papers called the shot a little early. SMAP are staying together but in the most unusual of fashions. Calling a press conference they appear to be more apologising than celebrating.

SMAP are that very rare creature, a boy band that has increased in popularity with time. And it's been quite some time. Formed as a six piece backing dance, rather than singing, group for the formulated acts of Johnnys (a juggernaut talent agency, curiously spelt without an apostrophe) in the closing days of the 1980's, they didn't really hit their stride until the early 1990s. But when they did there was no stopping them. Some fifty singles and twenty albums later they are still churning out the hits.

Now a quintet of ageing forty-somethings, this "boy" band may be about to hang up their microphones and dancing shoes but it is hard to overstate their mass appeal in Japan. Even hardcore fans recognise their somewhat limited vocal abilities with their success being based more on their characters, acting appearances and multiple TV talent shows rather than close harmonies and soaring melodies. But you have to be impressed they've kept it going for over twenty five years.

35 millions units later, the closest western equivalent would be The Back Street Boys or New Kids On The Block in their heydays. Being considered virtual cultural icons, the shock in Japan of a break-up will be similar to the news of the demise of Take That when they went their separate ways the first time back in the 1990s. And you never know, if only they could sing and speak a little English you might just have heard of Japan's most successful boy band ever. But they can't and you probably haven't. 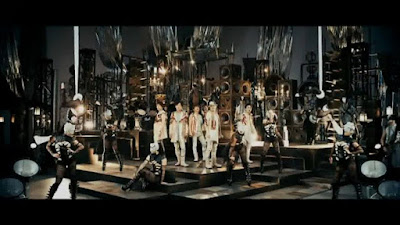 Email ThisBlogThis!Share to TwitterShare to FacebookShare to Pinterest
Labels: Smap