The Shibuya Incident and a very Bad Film

1946 wasn't a good year for Japan, though arguably better than 1945. The harvests had failed, food imports from the ex-colonies had ceased, some 5m+ refugees and returning soldiers added to the scarcity of resource and, on top of all this, the police were beginning to lose their grip. With Tokyo (and most other large cities) flattened by the war, the population started to turn to the black market for anything and everything needed. One enterprising yakuza gang even openly advertising for what little produce that existed to be "re-dsitributed" to the population. By themselves obviously.

The trade was highly lucrative and markets started to spring up around train stations across the country, a major one being in downtown Shibuya, which eventually, given the tensions between rival factions (and the police), led to The Shibuya Incident. A group Third Nationals (so called as they no longer held citizenship in Japan or their home country), in this case from Formosa (Taiwan), squared off with members of the Matsuba-kai (a registered yakuza gang still in existence today) and the inevitable riot ensued. A number of people were killed and many more injured though there is something of a disparity between various reports as to exactly how many of each.

Which brings us to the 2012 instant cult classic "Bad Film" by Sion Sono. The epic fight scene at the movies heart was filmed in one take at Shibuya Crossing without street permits and essentially as what we would call today a "flashmob" in 1995. It was then spliced together some seventeen years later by the director himself. And this depiction of violent gang warfare very nearly came to pass in those post-apocalyptic days (saved only by the Korean War...). But if you're wondering, the actual incident occurred outside Shibuya Police Station in what is now the intersection of 246, Roppongi Dori and Meiji Dori. However, if you're interested in Bad Film, a quick spoiler alert, make sure you know what you're getting into before you press play ok! 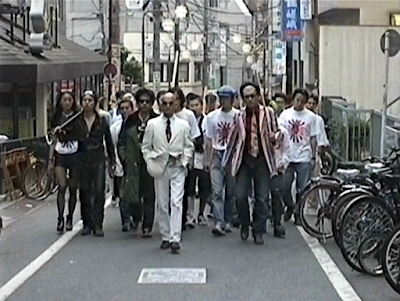 Posted by TenguLife at 4:24 PM