It has to be said that Japan often misses out on concert tours. The Stones recently didn't come to Japan, as didn't Springsteen, it's been nearly ten years since we saw Madonna and when The Who played in 2008 it was the first time they had been here after nearly forty years together. Some artists find difficulty relating to the crowds due to the level of English and others simply find there isn't the demand. However Clapton will make his twentieth visit next year, nearly making the Budonkan his home from home (the Albert Hall) and when Paul McCartney played the Tokyo Dome recently, 180,000 got a rare chance to see an old master take them back to the days of The Beatles. You have to be patient, but they do come. 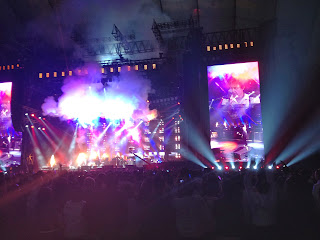 Posted by TenguLife at 2:02 PM