A gate to the past of Tokyo 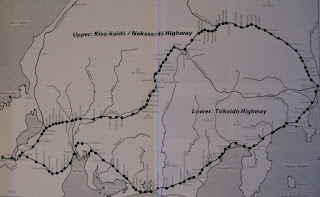 Before bullet trains and elevated highways, in fact before asphalt and motor cars, Japan was linked by a series of five super-highways constructed, or at least, extended, throughout the rule of the Tokugawa shogunate (1603 ~ 1868). This was primarily a time of peace in Japan and, whilst the shogun ruled his feudal lands with an iron hand, he also disarmed the country, demonstrating it is possible to remove all those weapons after all. Travel, although controlled, was allowed to facilitate both pilgrimage as well as trade and the Tokaido, the East Sea Road, was the quickest route between Tokyo, the political capital of the shogun, and Kyoto, the spiritual residence of the Emperor.

And the control of those roads was though a series of gates, tolls as they were known. The picture below is by Horoshige, one of Japanese classic artists, famous outside the shores of Japan for his imagery of the stations joining the roads. And in the lower left corner picture below is the Takanawa Gate, protecting the city from attack. Today, the foundations stones still stand though the bay is now landfill leading to the footbridge suspended under the Rainbow Bridge spanning Tokyo bay. The walkway is the spiral road, today the home of traffic jams and not so may tea shops. In the distance of the painting is Haneda, the central airport to the city. And beyond that, Yokohama.

Today people no longer walk the Tokaido. Indeed, twenty years ago my colleagues barely knew it's history, laughing when I suggested that Route 15 was once a main artery to old Japan. But if you walk the old roads, you will find these little parts of history. Near here was the original British compound, sword strikes still visible, as well as the resting site of the souls of the 47 ronin of Senkakuji. However, that's another story. And on the lower right you'll find the the Takanawa Prince Hotel. It was a long time ago but once I used to live there. But that was before there was a gate. Though after the Tokaido.