When the children break free 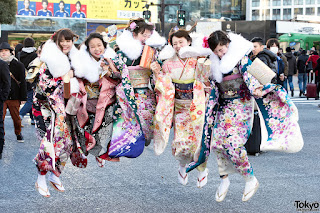 Ever since the year 2000, the second Monday of January has been a special day as each and every twenty year old reaches the age of majority (before 2000 that it was 15 January but that led to conflicts with the Happy Monday Law that automatically moves a national holiday to the following Monday if it happens to fall on a Sunday. Which it did on a fixed date). Although already recognised in law, on this day they become recognised as an adult in the eyes of a culture.

Morning ceremonies will be held across the country in town halls and schools to congratulate them and wish them well for the future but to also remind them of the responsibility they now hold in their hands. Dating back at least until the Nara Period (most of the 700's) the ceremony of Genpuku (colloquially translated as "to put ones head on") is a time of celebration (though sometimes with a little too much celebration...) for both the young adults coming of age but just as much a moment of pride for parents and family.

And so everyone will dress in their finest and attend their local ceremony; boys usually in ill-fitting suits looking someone uncomfortable, girls wearing incredibly ornate and beautiful furisode (pronounced "fu-ri-so-day") a long sleeved version of kimono, traditionally denoting the lady remains unmarried. So if you want the most incredible memories of Japan, grab your camera and head into town, it is truly a sight to behold. And congratulations, probably with some hiccups on the way, you've made it to adulthood. Have a wonderful day. 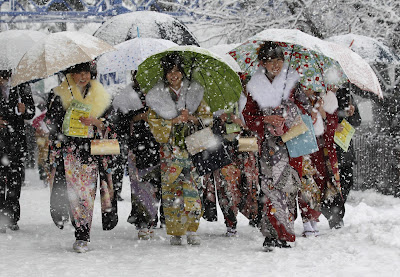 Posted by TenguLife at 2:18 PM