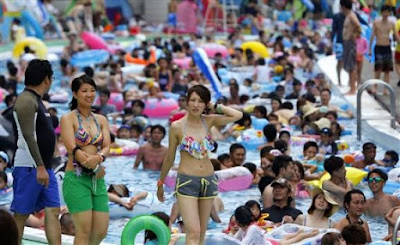 It reached 34C in Tokyo today. With an effective temperature approaching 40C when you take into account that the official figures are measured in a small, sun sheltered box of the Met Office. Now it has to be said but I actually don't know the name of the Japanese Met Office so we'll stick with the UK version for now. But it was these people who figured out, in November 1944, just what a jet stream, a narrow and fast air current, running at about 30,000 feet, is all about.

Realising these air currents ran around the world, Japan invented the world's first cruise missiles by launching balloon-bombs with timers that drifted across The Pacific until time was up and they dropped on the west coast of America (sadly taking the lives of a family, out for a picnic one day, the only arial bombardment casualties on the continent during WW2 hostilities). So these guys are clever and creative people. But if you want to know the weather, just look out of the window of a morning. If people are carrying umbrellas, it's going to rain.

But today was hot. Nighttime temperature is not forecast to drop below 26C. There's a noticeable lack of joggers on the streets and the taxis are running with full air-con blowing. Except, of course, for mine today. And the next seven days are all forecast at 32C or hotter accompanied with thunderstorms, except for Saturday. Which doesn't have thunderstorms. So I would just like to thank Willis Haviland Carrier, who, in 1902, invented the modern air-conditioning system. Thank you Willis, and if your decedents are reading this and outside, see you in October. When it's cooler.

Posted by TenguLife at 6:47 PM