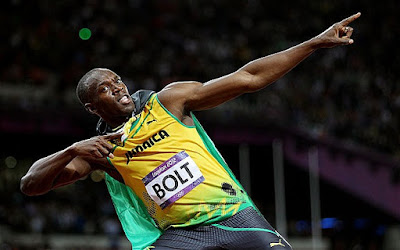 There's a major thunderstorm outside, no huge surprise for this time of year. I was once in-stadium for a national team game that was somewhat shortened by something similar. When the lightning struck the stadium, the referee blew the whistle, time for the players to head for safer territory. And time for the spectators to head for cover too. So the obvious question to ask is, why hold the Olympics at this time of year? Peak heat and thunderstorms. Could be an interesting event with no roof to the stadium. At least that was the thought until suddenly there was no stadium.

OK, that strike was close. The car alarm it set off is a good indicator we're in something of the centre and the neighbouring building has just taken a direct hit. The rain is now getting heavier and Tokyo's micro-climate is enjoying a summer's day. In 1964 the summer Olympics were held here in the middle two weeks of October. Beautiful weather at that time of year. But it's now almost black outside in the middle of the afternoon. At least in October there is only the occasional typhoon to be concerned about. And earthquakes of course but there is little anyone can do about those.

So what happened to the stadium? Well, last week the government moved a controversial set of new laws through the Diet and, to boost flagging popularity, appears to have cancelled the equally controversial design for a new stadium. The old one had seen better days and is now a hole in the ground, no coming back from there. The cost of the new one was simply becoming stratospheric. The belief is that ingenuity will come to the rescue and a new, more taxpayer friendly, option will be chosen and implemented. Five years is a possible time line for the 2020 Olympics. But that's probably not a comfort to the organisers of the Rugby World Cup for 2019. That was their stadium too. Still thundering outside.

Posted by TenguLife at 2:38 PM