The Siege of the Samurai Blue 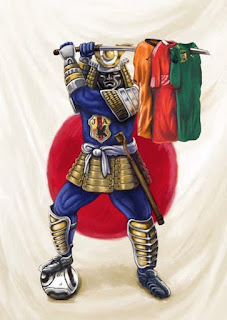 In the summer of 2010 the Japanese national soccer team, "The Samurai Blue" (a name generally only used in English, the Japanese more traditionally naming the team after the coach at the time (if you were wondering)) were preparing through a number of friendly games for the World Cup to be hosted by South Africa that year. And things were not going well. In fact, things were going so badly that in a game against England in Graz, Austria, Japan scored no less than three times and lost 2 : 1 (think about it). As a result the airport was somewhat deserted as the pale Blue Samurai returned home before setting sites on the tournament proper some two weeks hence. 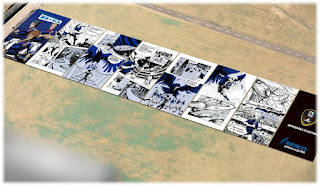 Losses to Serbia and arch-rivals South Korea didn't help the national atmosphere all that much and the team were generally being pilloried in the press of the day. adidas (not a typo, it is actually spelt with a lower case "a"), sponsors of the JFA, had been focusing on the youth of the country, working with a number of schools throughout the Spring and organising each to have the students write messages of support on thirteen giant manga. Slotted together and laid out on the flight path of jet airplanes as they departed Haneda International Airport, the Sky Comic was awarded a Guinness World for the largest comic strip in the world. And still the fans, they did not come. 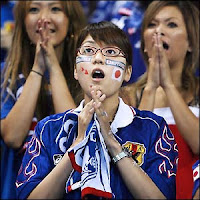 And then things started to change. Wins over Cameroon and more notably Denmark saw the team through to the last sixteen where they faced Paraguay and suddenly the country started to take notice, sit up, stand, and finally cheer. A 0 : 0 full time score line saw the players march to their respective ends for the dreaded penalty shoot out. The country was going wild and then a cross bar from Komano handed advantage to Paraguay and silence fell as Cardozo stepped up. And converted. Japan was heartbroken but the team were now national heroes and this time when they flew back, landing at Kansai International, the crowd of thousands just went wild. And yes, I was there. And I did too. And the siege of the Blue Samurai was lifted. 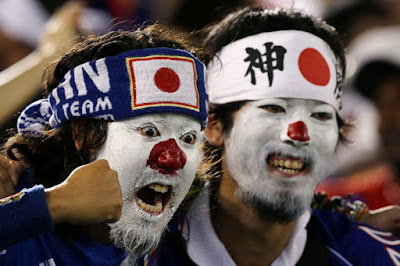 Posted by TenguLife at 2:21 PM