I am very very waiting 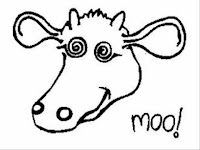 Native, and to a large extent proficient non-native speakers of English, tend not to notice some of the complete curve balls (American phrase) that can be played with a straight bat (English) whilst putting the cart before the cow (French). It's only when you live somewhere like Japan and the room stops as everyone looks-up the meaning of a basket case you realise we don't speak English, if you think about it we actually speak idiom.

This can cause more than just a little chaos. Most Japanese have never heard of Blackadder and so when you refer to your cunning plan, people tend to assume you actually have a plan. And a sticky situation, stickier than when sticky the stick-insect was stuck to a sticky bun, is seriously going to get you nowhere. And once in a meeting a colleague exclaimed that you don't use a mackerel to catch a sprat, even I had to pause for thought.

But English has one key advantage. Less than half the worlds users are native; we are used to hearing it in it's different forms. When someone refers to finding a mouse, we automatically take in the context and understand whether someone is talking about a food cupboard or a work station. But Japanese is so much more homogenous that leaps of lateral thinking are less  likely, for example the word for a virus is wirusu (wils) from the German, unless you're a computer, and then it's a birus. Languages are funny things, but someone with bad English, speaks two.