The Fratellis in Shibuya

Roppongi is famed as the night life centre of Tokyo for the foreign community having housed some of the infamous gaijin friendly establishments dating back to the 1960s as it drew the crowds away from Akasaka and the Ginza. However, it's not where the locals party, especially the young; they hang out in back streets of Shibuya where the bars and clubs often start late and finish even later.

The clubs, although very focussed on the domestic market, often without a word of English to assist even in basic directions, such as where is the door, are just as happy to host a foreign band as a local one. The big name acts are seen at venues like the Budokan or Tokyo Dome but if you're looking for something a little different, take a walk down the side streets of Dogenzaka. O-East, Quattro, O-West, Womb and the rest always have a hugely diverse selection of entertainment to choose from.

And the vibrancy was raised to "11" last night as the Scottish band The Fratellis brought the house down in front of around 500 Japanese fans who seemed to know the words to every single song and who carried a flag waving Scottish fan on their shoulders for much of the time. Highly talented and highly enjoyable, it was a great show. Thanking the crowd and pointing out that without them they'd just be three guys in an empty room, they left the audience ears still ringing. And then we walked home. Shibuya is just so easy. 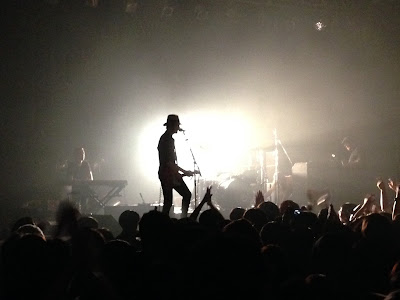