The Cosplay Lifestyle of Japan

Cosplay, (short for costume play) is not uncommon at conventions and exhibitions around the world especially at events such as Comic-Con in the US where people dive into characters that are astonishingly realistic, many deserve a worthy mention and a few should maybe try again the next year. The word, though not the practice, is Japanese in origin dating back to 1984 when it was coined by Nobuyuki Takahashi writing in a manga fan magazine about a science fiction conference he's attended in Los Angeles.

But Japan takes this harmless hobby to a whole new dimension. Here, it's not reserved for special events or conventions, in Japan it's a completely immersive way of life. Walk the streets of Harajuku in central Tokyo on a Sunday afternoon and you'll meet every whip wielding nurse or Alice attired maid you could ever want to see. The costumes are often incredibly elaborate and may share a theme between entire groups of fans, co-ordinated and dressed to kill. Indeed, the entrance to the Meiji Shrine is often packed with (predominantly) young women getting into costume and character for a day out on the town.

And now Tokyo Disneyland is throwing its doors open to the Cosplayers for two special weeks before Halloween, allowing adults, rather than only children, to enter the fun by joining the spectacle. This being Japan there are of course rules; Disney Characters only please; it's a family event, no uncovered shoulders or tummy buttons; no full face make-up and nothing to impede the mobility of others. Apart from that, if you want to hang out for the day as Snow White, Donald Duck, Captain Jack Sparrow or The Incredibles, Tokyo Disneyland is waiting for you. Knock yourself out. 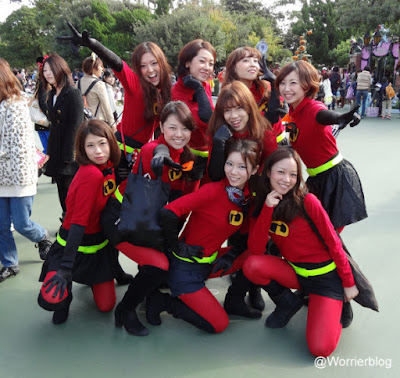