Update: September 14, 2015: Mt Aso in Kyushu, southern Japan, erupts sending ash 2km into the air. Early reports everyone has been evacuated and with a little luck, it'll all be quiet again soon. 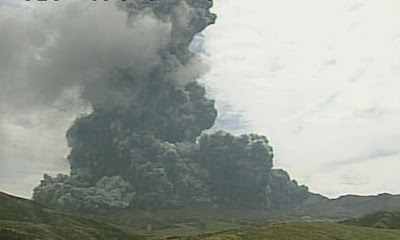 Krakatoa is famous for a number of reasons, probably the most unfortunate being the (catastrophically bad) 1969 disaster movie "Karaktoa East of Java". Panned by the critics, it was not only the only disaster movie made in wide format Super Panavision 70, but it also miscalculated the location, Krakatoa actually being west of Java. Aside from this, it was also responsible for the loudest recorded "bang" in human history, with the shockwaves being picked up on barometers around the globe. However, as an eruption, it was dwarfed by the much larger, though relatively unknown, Tambora some seventy years earlier. Which actually is east of Java.

The Krakatoa eruption, of 1883, delivered approximately 35 cubic kilometres of rock into the skies, an explosion more than 10,000 times that of Little Boy, the atomic bomb that destroyed Hiroshima. Puts the nuclear age somewhat into perspective. Tambora in 1815, by comparison, ejected 160 cubic kilometres into the atmosphere and was so extreme that it caused famine around the world, 1816 being known in Europe as the year without a summer. And then we come to Mount Aso in Kyushu, Japan.

Aso, with a circumference of 120km, is one of the world's largest volcanos, or more accurately, super-volcanos. It sits in the centre of the southern island of the main Japanese archipelago, approximately 1,000km to the southwest of Tokyo. Although Mount Aso is constantly rumbling, the last time it really decided to let everyone know that it was there, it sent over 600 cubic kilometres skywards. Nearly twenty times the scale of Krakatoa, that's approximately equal to launching Mount Fuji into the heavens. However, looking on the bright side, at least that was some 300,000 years ago. And I'm pretty sure they didn't have barometers back then.
Posted by TenguLife at 12:37 PM