The Street Art of Yasutake Kameda - a Sewer Story

Yasutake Kameda could not, under the wildest stretches of imagination, have been considered a great artist in his own right. But he was a visionary in his own way. Sparking a revolution at peoples feet, his canvas was the broadest of all as he brought colour and imagination to the streets of Japan. A dyed in the wool bureaucrat in the Ministry of Construction, it was his responsibility in the early 1980's to convince the provinces of Japan that they really wanted to be connected to the main sewer system, at this point servicing a mere 60% of the population in what was considered a first world nation. 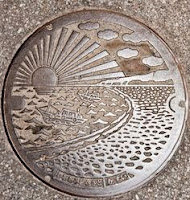 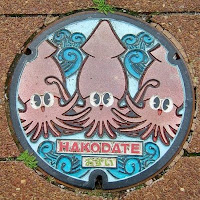 Not believing in the old adage of out of sight, out of mind, Kameda decided that if the people couldn't be brought to the sewer system, the sewer system should be brought to them. And so he removed their handcuffs and raised the humble manhole cover to an art form. Allowing towns and municipalities to design their own creations, providing for localised patterns to which people could relate, he sparked a revolution that adorns the streets of Japan today. Defining simple safety guidelines and then getting out of the way, he created a totally new genre in art, something the common man could relate to. 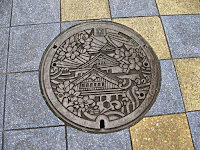 And so today, the patterns must provide grip for motorcycles in the wet and the covers must remain firmly in place despite the efforts of the worst of typhoons, but apart from that, the only limit is the imagination. And what an imagination. Costing an estimated 5% more than the standard variety, there are now over 6,000 designer manhole covers brightening our days on Japan's streets and byways. So next time you're looking for an art gallery or cultural museum, look to your feet. You might just find you're standing on it. And Yasutake Kameda would probably be happy you appreciate his work. 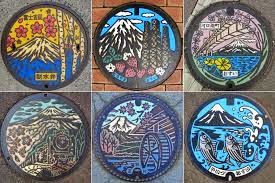