And so rainy season begins. At least in Okinawa....

Looking out of my window in downtown Tokyo I can see gentle specks of rain falling on the glass, but we have a little time to wait as yet. It's another four weeks or so until rainy season reaches the metropolis but it has already started in the southern islands of Okinawa according to the Japan Meteorological Office. Sometime yesterday. Spot on schedule. And how anyone can define the beginning of a season is beyond me but there it is. Rainy season is officially here. And to be fair, it will go out in the same fashion, with an announcement on TV, sometime in mid-July.

The actual cause of the rains is the slow progression north of the subtropical ridge as the ocean temperatures rise with the onset of summer. Everything really starts to happen after the spring equinox as the sun passes over the equator. The weather system creates the perfect conditions to mix cold, northerly air with the warm, moist equatorial flows. The result is wet. Not India monsoon wet, but persistent, daily wet. Though is you pertain from Oregon or the west coast of Ireland, you'll probably laugh and consider it a beautiful summer's day.

In Tokyo we'll see an uplift in precipitation in around a months time in early-mid June, continuing for nearly six weeks into mid-late July. And then it gets hot. Seriously hot. Neither rainy season nor summer are great times to visit Japan. It's both exhausting and particularly rubbish photo time with grey skies in the rain or terminal sweat in the sun. But then the typhoons will arrive. Clearing out the air, they blast through the islands in a matter of days, rarely pausing in their north-easterly march. You may see 20cm of rain in a single day, and I've seen the gusts literally turn peoples clothes inside-out. But it means the heat is over. So avoid the rain and the heat, come visit us in October, it's cool and you won't need an umbrella. 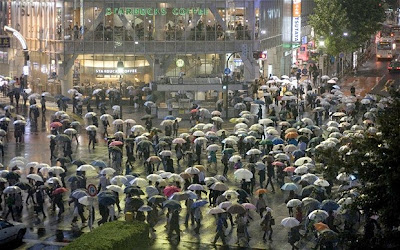 Posted by TenguLife at 9:40 AM