When an Englishman went to war with Japan

No, the events I'm referring to are not those commencing in 1941. That was the second time Great Britain and the Empire of Japan had crossed swords. This action occurred much earlier. In 1863 to be precise. The (thankfully short) campaign was precipitated by the unfortunate death a year earlier of an Englishman by the name of Charles Lennox Richardson in what became known as the Namamugi Incident. The English considered his death unprovoked murder, the Japanese, a justifiable action considering how inappropriate his actions had been.

Travelling north from the foreign enclave of Yokohama on the Tokaido, the ancient highway to Tokyo, Richardson and his party were enjoying a day out to visit the local Kawasaki Daishi temple. En route they encountered the retinue of the Regent of Satsuma embarking on the long journey to Kyushu after a stay in the capital. Refusing to make way, Richardson reportedly remarked to his friends that he "knew how to deal with these people" and rode through the centre of the Regent's entourage. The Regent, refusing to believe anyone could be that provocative, proposed his rapid demise then and there.

Outraged and demanding reparations, the British ordered their ironclads to Kagoshima, the capital of the Satsuma domain, bombarding, and eventually setting fire to, the city. However, having anticipated the arrival of the British ships, the population had previously been evacuated out of range and the city's own guns prepared. Returning fire, surprising the British and felling the Captain of the British flagship, Japan gave as good as it got. The "Anglo-Satsuma War" eventually cost the lives of five Japanese and thirteen British combatants but the Daimyo was so impressed by the British guns that eventually he became a supporter and entered into a treaty. And he never did repay the shogun for the loan he'd taken to settle claim in the first place. 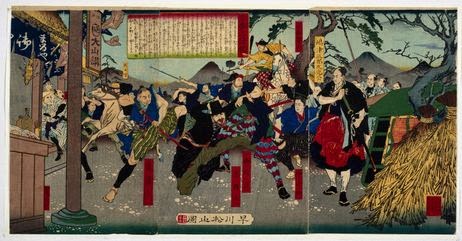