More years ago than I care to remember I walked "The Kiso Way" from Magome to Tsumago in Nagano-ken, one of the few remaining sections of the Tokaido, the Edo Period stone highway connecting Tokyo and Kyoto. At least I thought I did. Researching this article I've found I'd strolled the Nakasendo, the other road from Tokyo to Kyoto. Which somewhat negates the flow of this article that last weekend I walked the other end of the Tokaido, but this time I'm sure. I had a historian with me. And he had a map.

Setting off from Hachiko in central Tokyo at 6.00AM beating the noise and heat of day (admittedly in December so we somewhat embraced the chill of the morning) with a purpose in mind. I enjoy a good walk and my destination was the Gaijin Botchi (Foreigners' Cemetery) on the bluff overlooking Yokohama, some thirty-five kilometers to the south. I had a detour in mind this time, I'd known of the Namamugi Incident when an Englishman took on the 700 strong retinue of a homeward bound Daimyo with a somewhat predictable outcome. But at least they put up a plaque to him and erected a small (and quite quaint) memorial right next to the Spring Valley Brewery (interestingly founded next to our destination for the day).

Strolling in the morning light we passed through Magome again, this one a suburb of Tokyo (no offense to the residents but, don't go there) and caught up with the third of our party. And then age and sore hips started to take their hold and a detour via a morning cafe where wine and painkillers would be gratefully quaffed became something of a necessity (en-route to which we came across a rusted Nissan Skyline shooting break carrying a tax disk that showed it hadn't been driven in over thirty years, about the same time I was walking through the peace and beauty of the first Magome. And strangely a sign on the side announcing "For Public Use Only").

Sustenance received and we moved on. To the train station from where we advanced to Namamugi of said incident only to find the wall and the plaque had succumbed to a wrecking crew less than a week before and the memorial had been relocated (but this one we found). We did find a red footprint and decided this must be the spot of the epic battle and so declared the first objective of the day duly successfully achieved and boarded our train bound for the Gaijin Botchi, a few stops beyond Yokohama Station.

Climbing the steep rise to upper plateaux of the Bluff (actually, there's an escalator concealed inside the hill) we reached the destination of our eventful day. To find it locked. But what a beautiful day, December and people were picnicking on the lawns with a bridal pair thanking their lucky stars for the photo-op. So we crossed from the view of Fuji to the other side of the hilltop and took in the view of Yokohama Bay, thinking of those days before escalators had been invented. And then we went home. By train. No reason to be silly about it. 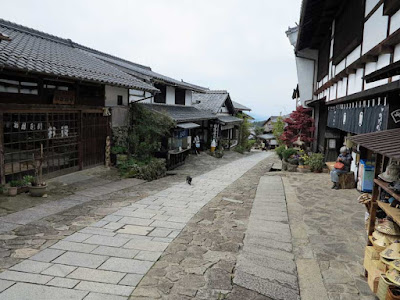 Thanks go to Rory and Marty!
Posted by TenguLife at 1:33 PM