A Horse to Hokkaido

In 1878 the (yet to be) empire of Japan had not only opened to foreigners for the first time in nearly 300 years but had been through a civil war, embraced a new (actually its first) constitution placing the Emperor (Mikado) at the center of both political and religious helms but also relocated said foreigners from Shimoda (where they could count the ships supplying supplies to Tokyo) to the sleepy port town of Yokohama (where they could be seen but not heard). And then Isabella Bird arrived.

Leaving England to find balmier climes for health reasons (and not enjoying Australia too much) she arrived in Yokohama to start a quite remarkable journey. The limited foreign residence ensured she quickly had the opportunity to embrace international society in Japan including the interesting (and, one day to be, ambassador) Ernest Satow (who had arguably, accidentally, set of the civil war mentioned above by noting that foreign powers needed a central government for negotiations rather than a loose affiliation of warring factions). Her purpose was to ride a horse to Hakodate. A distance of some 800km to the north on the (extremely remote at that time) island of Hokkaido.

She hired a guide, stayed with local people, was viewed as a exhibit to be seen, met and dined with Ainu, experienced a typhoon whilst returning home and all of this by the age of 47. Almost exactly 100 years later an Englishman by the name of Alan Booth reversed the journey walking from Cape Soya in Northern Hokkaido to Cape Sata, the very southern most point of Kyushu. And much of their tales ring with resemblance. The kindness of people, the beauty of the country, the isolation (and the revenge of the fish). And this weekend I'm planning to take a walk from Hachiko in central Tokyo to the Gaijin Botchi in Yokohama. It'll be interesting to see how much of the journey remains. 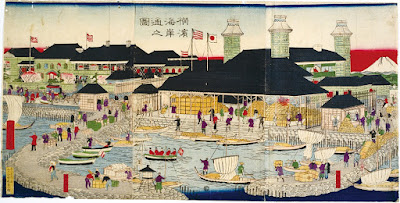