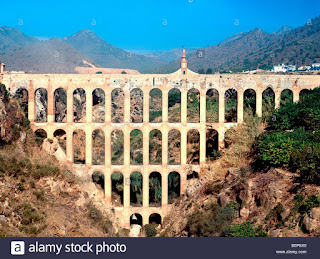 It would only be the most heartless of us who would be unable to identify with the Roman engineer who had to calculate the product of MCML x IV. Or maybe not, most have probably never really thought it through but next time you see one of the astonishing aqueducts spanning a river valley in Europe, think about the people who built it and how they calculated it wouldn't fall. For the next two thousand years.

But the Romans did have one tool in the box, the Mesopotamian abacus. A framework of beads and concepts that allows for complex multiplication and the water systems of cities though it has to be recognised that division is a little more problematic. And then Japan got its hands on one, some time around the middle of the fourteenth century, removed a bead and the soroban was born. And is still going strong today. Technically, the difference between a soroban and an abacus is the one vs two arrangement in the upper element of the device.


Both work equally well and indeed you will see Japanese people performing mental arithmetic as their fingers imperceptibly flick beads up and down an imaginary adding machine. And this week I'll be interviewing someone who, on their resume, state that one of their life achievements was to gain Grade II in the use of the abacus. I guess they meant soroban but assumed I wouldn't understand. I do, but I also remain impressed as always by someone who has a skill I have yet to master.