What The Dickens! - A Shakespearean Pub in Tokyo

What The Dickens! is an English style pub tucked away on the top floor of a distinctly curious building in the back streets of Ebisu, a lively district on the fringes of Shibuya in central Tokyo. One of the pioneers of warm beer and great pub grub, it opened its doors in the late 1990's and boasts an interestingly winding two floor interior as well as loud live bands. It also features a brain teaser of an entry; if you can't open the door, that's not the door you're trying to open. Look for the handle on your left.

Stepping inside you could be forgiven for thinking you'd just been transported through space and time to the back streets of Victorian London. They have absolutely nailed the authentic decor of a traditional English pub. Relatively famous amongst the foreign crowd, the walls are plastered with Dickensian quotes and passages, which is a little ironic as the phrase has nothing to do with Dickens but rather derives from Shakespeare, spoken some 250 years earlier by Mistress Page in The Merry Wives of Windsor.

The space also boasts an interesting history having previously housed an office of the now defunct death-cult, Aum Shinrikyo, which, one day in March 1995, thought it might be a good idea to release sarin gas into the Tokyo Metro. The organisation was subsequently disbanded and What The Dickens! moved in. And although there has been at least one unfortunate individual who has shuffled off this mortal coil over a beer in the years since, this had nothing to do with the fine ales and chicken pies served by the friendly landlord. All in all, Shakespeare would probably have been quite at home here in Ebisu. 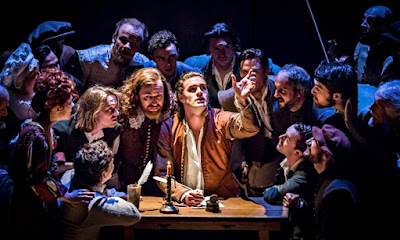 Email ThisBlogThis!Share to TwitterShare to FacebookShare to Pinterest
Labels: Aum Shinrikyo, Shakespeare, What The Dickens!