It would take someone with a heart of ice-cold stone not to be moved by the images flowing from Europe at present as refugees pour through rapidly closing gateways. There is the greatest exodus in living memory crossing the continent with the hope of reaching the northern states and a new life. Germany is leading the way, but then again, it needs to. The German population is going into reverse; Germany needs the people.

Japan is staring the same stark long-term decline in the face, the count of Japanese citizens already falling following the peak in 2012. The government has announced a policy to ensure the population doesn't fall below 100m, from 127m today, but the problem is, the country needs people and it needs them young. And with a fertility rate of ~1.41, this is simply not happening. Towns and villages in the countryside are already shutting up shop, how long until the regional cities are forced to follow?

The Prime Minister has announced to the United Nations General Assembly that Japan has its own headcount problems and until these are resolved, mass immigration is off the table. Unfortunately the  outcome is imminently predictable; count the babies today and you know the population tomorrow.  In the meantime, one village has decided to take a stand. Nagoro, in southern Japan, is repopulating with scarecrow people. Not really sure this is a long term solution though. 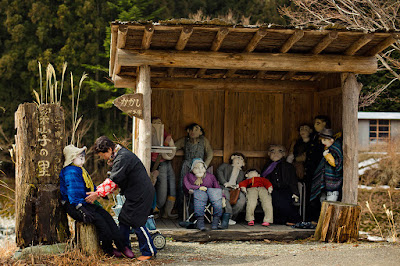 Posted by TenguLife at 7:04 PM