UPDATE: At 101, the station put on quite a show. If you'd like to see the lights, they're on until 27th. Happy Christmas! 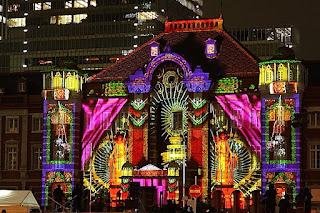 Tokyo Station turned 100 this week, a seminal moment given the journey it's had over that time and means it shares its anniversary with Maserati (if you were wondering). A long face lift was completed in 2012 and the station has returned to its former glory sitting at the hub of twelve separate railway lines (none of which is a subway if you're looking for it on the map). It survived the 1923 Kanto earthquake (more of which later) and a world war. Not bad for a location that would have been fairly central to bomber command.

Near to the station, a few minutes walk away, is the third Imperial Hotel, a 1960's edifice and these days possibly one of the ugliest buildings in Tokyo. The second Imperial Hotel was a majestic design by Frank Lloyd Wright and opened 1 September 1923. The very day of the Kanto earthquake. Over 140,000 people lost their lives as fire claimed the city but the hotel stood and remained open for business though some parts sank and the structure was stress tested to the limit. The FLW design was an icon of modernising Japan, the current hotel simply isn't.

So Tokyo Station reaches its centenary with an earthquake, a city levelling fire, a world war and another earthquake and it still remains an awesome sight as you drive through the glass and steel boxes that make up Marunouchi of today. Happy Birthday Tokyo Station, it may have been chaos on the day as people pounced on souvenirs and resold them on ebay but on the whole, you're looking pretty good for 100. 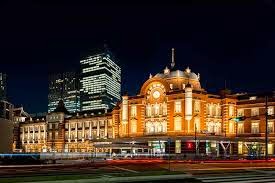 Posted by TenguLife at 5:49 PM