Jesus in Japan and other Christmas stories

Japan, on the whole, doesn't celebrate Christmas that much but there are some interesting stories around the day. In the 1980's the Sogo department store in Yurakucho is reputed to have nailed Santa to the cross but this may have been an urban myth. Good one though. I've blogged before about the buckets of Kentucky Fried Chicken wings and watched yesterday as the first early customers started to collect their orders, though they appeared more from obligation than want.

Recently a news article highlighted the stories from Japanese married to foreigners and how Christmas was such a stressful time. They lamented about the difficulties of choosing presents (remember, it's the thought that counts) and having to eat turkey (seriously, don't eat it if you don't like it). But for most people the actual day is a little bit of a non-event; a normal working day just like any other. New Year is the real family day in Japan.

There is one story though of a garlic farmer who came from the east and through Alaska two thousand years ago. He settled in the village of Shingo in Aomori, northern Japan, married and had three children. His name in Japanese became Daitenku Taro Jurai and he finally passed at the ripe old age of 106. In English we know him better as Jesus Christ and you can visit the shrine to his passing currently located in the grounds of a local factory. The story of how he escaped the Romans though, well that has been lost with the passage of time. Happy Christmas wherever you may be and whatever you may believe. 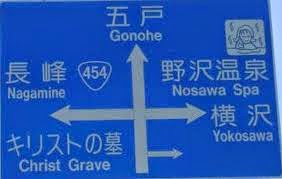 Posted by TenguLife at 1:35 PM