Miyashita Park - visions of future past

A few years ago a certain global sports brand got themselves into a ridiculous situation of being damned in the press and by the good people of Tokyo for trying to redevelop, rename and sponsor a famous park in the middle Shibuya. The argument went that it was a historic location much loved by all who grew up in the area and should remained untouched.

Emotions were running high and at one point barricades were manned to prevent the developers moving in. Working for a rival global sports brand, and with a certain sense of schadenfreude, I sat back to watch the story rapidly spiral downhill. The only problem was, I didn't know where it was. Everyone told me it was famous and in the middle of the very area I lived. But I still couldn't find it. Until someone actually took me there.

With all the descriptions I'd heard I was looking for something like a mini-version of Central Park or Hyde Park in London. What I found was a mud flat with tarpaulin tents along its length. And I found it on top of a car park where it had been moved for the Tokyo Olympics some 50 years ago. And this is one of the things I love about Japan. People can look at something and see the history and the romance and completely look through the reality. It's a handy trick living in the middle of the largest piece of concrete in the world. 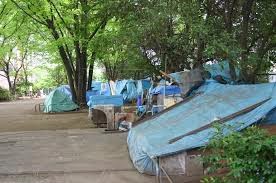 Posted by TenguLife at 2:55 PM