The Olympics of Kano Jigoro

On a sunny 4th of August, the Japanese athlete, Naoto Tajima, leapt 7.74m into the history books of the 1936 Berlin Olympics. Triple jumper by speciality, he was more than a half decent long jumper too. He came third that day and stood on the pantheon taking his place and laurels into history. Standing next to Jesse Owens who was on his way to winning four gold medals (and somewhat poking a stick in the eve of a certain dictator) (oh, and wearing very early Adidas running shoes) outlines his achievements.

However, this story is about the Japanese delegation which had been lobbying hard for a number of years to host the 1940 Olympics, a petition which subsequently was successful. The head of the Japanese Olympic Committee, Kano Jigoro went as far as to say that if Japan was not awarded the games, then the Olympic Committee had "got it wrong". And he would organize another games, bigger and better.

This was to be Japan's final showing in the Olympics until 1952 in Helsinki, the invitation letter to London 1948 presumably lost in the post. Kano Jigoro's vision for 1940 didn't come to pass as no one had mentioned the coming invasion of China and Japan, subsequently, being shown the host nations door, however he did go down in a little bit of history. Between Jesse Owens and Naoto Tajima, you can make him out in the background, not looking very happy. But probably better than the host on that day. 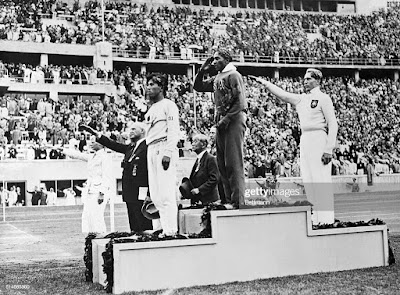 Posted by TenguLife at 3:37 PM