Winter waterfalls - the beauty of ice 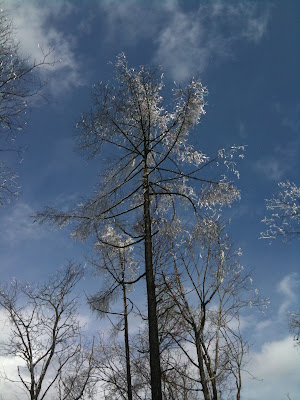 Japan can be cold. We sit off the eastern coast of the world's largest single land mass so it's going to happen from time to time that the wind will come to visit us directly from Siberia; and that's really cold. But sometimes it pulls a surprise and although the air temperature is sub-zero, it starts to rain. And then you have an ice storm. The rain falls and as it touches the first thing when it reaches the ground it instantly turns to ice. As my postman can attest to. Once I chiseled him out.

But strangely the reverse is also true. In the mountains of central Japan, people will dry their laundry outside on a washing line, in the middle of winter, at -15C. The whole process works because the air itself is so dry that you can walk outside in a T-shirt and drink a cup of coffee without really feeling the chill. A little different to where I grew up; cold was cold in those days.

Then there is what happens to waterfalls in an arctic climate. Japan is roughly on a par with Arizona and the north coast of Africa but that Siberian wind makes all the difference. And the rivers freeze over. Indeed, people will bring the hoses out and deliberately create their own ice sculptures in the winter months by slowly spraying water on a tree or rock. And yes, I did do it. And yes it looked awesome; like a waterfall of ice. But this is the tree that my postman sheltered underneath. Not sure it helped.