The wonderful works of Jin Watanabe

Japan, it has to be said is somewhat awash with museums of a wide and wonderful kind. Some of them even have exhibits (there was a small problem with bubble era funding, great architecture, and then the money ran out before the purpose could be fulfilled and artifacts installed). But there is one that is a throw back in time and you really need to know where to look. And it isn't a throw back in the sense of the Smithsonian or the Natural History Museum, both of which are triumphs of their era that somehow remain contemporary today; no, this one leaves you sipping tea, sitting in a world that would not be unfamiliar to realms of Hercule Poirot. 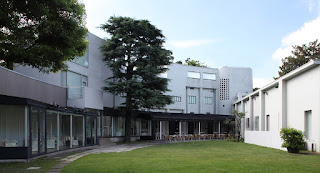 Set behind a high stone wall in amongst tall, shady trees is the creation of master architect Jin Watanabe who, in 1938, in the early years of the Showa period, designed the self enclosed Bauhausian structure for businessman Toshio Hara, grandfather to the current owner. In 1979 it was finally liberated from use as various embassies and converted to an art museum, though arguably the finest piece in its collection is the building itself. If you ever happen to be in the vicinity of Kita-Shinagawa, downtown Tokyo, it is worth a waste of time. 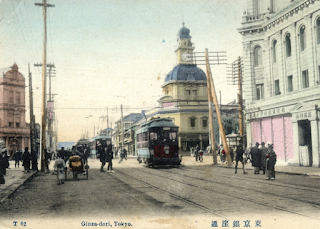 But Jin Watanabe is not so famous for this delight but more for the Wako Building in central Ginza; the one with the clock tower. Soon a favorite meeting point, the clock tower is actually the second incarnation of the Seiko time piece. The building was originally created in the late 19th century in the central glitzy area of then up and coming Ginza. Which then burnt down a couple of times. And so in 1932, the all new, Jin Watanabe designed, Wako Building was created with a genuine stone facade to defend from the flames. Which turned out to be useful as it was the only building in the area to survive WWII. And it had a spanking new clock on the top. And it's still a favorite meeting point today. And Seiko means precision in Japanese; just if you were wondering. 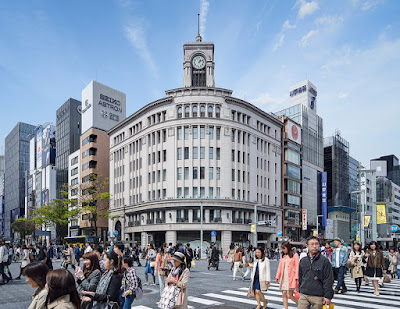 Posted by TenguLife at 6:25 PM