Sunset, Fireworks and Fuji - life doesn't get much better 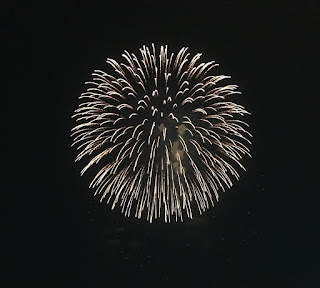 Enoshima, or Bay Island, is situated a little over an hour away from Tokyo by train and holds a special place in the Japanese psyche. Apart from being breathtakingly beautiful at sunset, it isn't actually an island due to the 600m bridge that connects it to the mainland. And the bridge itself was built on a sand spit so hard to argue however when you see it, you'll be fine with the distinction of an island as it's rocky outcrop rises from the waters of Sagami Bay. And man is it good for launching fireworks.

Bought by an Englishman by the name of Samuel Cocking in 1880, it's development was certainly assisted through the slaying by Benten, one of the seven lucky gods, of a five headed dragon, the continuing existence of which would certainly have discouraged the 500,000 tourists a year who visit for a hearty day out at the botanical gardens situated in it's upper reaches. An added bonus on a good day is the backdrop of a sunset over Fuji, so if you're looking for a day out, it pretty much has the full Monty. 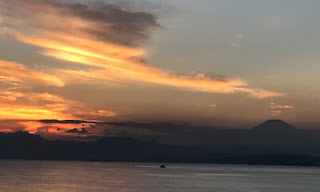 And once a year the seemingly entire population of Japan descends on this coastal picture postcard town to watch some three thousand rockets blast into the night sky, each explosion enough to set off car alarms in California. This spectacular display continues for over half an hour, sometimes set to music, and sometimes purely visual. And as the final fiery stars tumble into the bay, millions of excited people turn and head for home although we sat down to ice cold beer, kindly organised by Mie-chan, to whom I'm eternally grateful. And if you click on the picture below, you too can join the final moments of a magical evening. 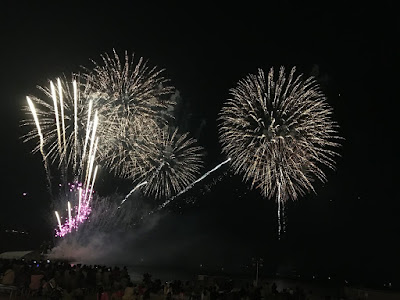